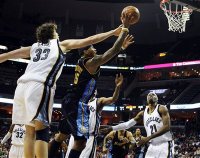 I watched the Lakers play the 76ers last night. After Kobe Bryant hit what seemingly was yet another game-winner in his career chock-full of game-winners, Andre Iguodala was able squeeze in a game-winner of his own, hitting a three-point shot in Trevor Ariza's face with no time left to seal the 76ers victory. As this was happening, Stu Lantz and Joel Myers (the Lakers announcers) were yelling "foul, foul, why aren't they fouling?!" And after the game, Phil Jackson pulled a John Calipari from last year's NCAA Championship game by claiming that he told Ariza to foul but apparently the instructions didn't take.

Thankfully for Nuggets fans, Kenyon Martin listens to his coach. Even though it's kind of bush league (in my opinion) to purposefully foul the opposing team when you're up by three with just seconds remaining in a basketball game, it's allowed in the rules and is absolutely the smart play. And Nuggets head coach George Karl did a lot of smart things tonight, especially with his substitutions down the stretch. And while it's unfortunate that it took almost an entire season for Karl to realize it, he finally gave Renaldo Balkman double the minutes that Linas Kleiza received. This is exactly how Balkman should be used versus Kleiza the rest of the way.

And while we're handing out props, big props go to Chauncey Billups, Nene and J.R. Smith for staying aggressive, and to Carmelo Anthony for finally shooting at least eight free throws in a game (for only the second time in 11 games). And let's not forget to give credit to Martin and Anthony Carter for stepping up big in the closing seconds, securing the basketball and preserving the Nuggets hard fought victory. Martin's block of O.J. Mayo with 11 seconds left might have been the biggest defensive play of the season for the Nuggets.

I must confess that well into the fourth quarter I was prepared to put the Nuggets play against sub-.500 teams back on the Stiff List. I was even going to fire Nuggetsadamus and suggest the Nuggets start bringing Rocky with them on the road, because they clearly have lost their way in these road games. But maybe tonight's game - not a great game but certainly an exciting game - will give them the confidence they need to regain their swagger on the road. I have to ask, though: when will the Nuggets learn that they can't take three-and-a-half quarters off against bad teams? All it takes is a few ridiculous miracle shots from your opponent - like we saw from Memphis tonight - and you're toast.

But reflecting back on the positives here. The Nuggets have now won 11 games this season after trailing by 10 points. This team can be infuriating and frustrating to watch (just ask my girlfriend who listened to me screaming at the TV for the last two hours), but more often than not, they know how to win.

The Nuggets need to re-establish their dominance over the NBA's worst teams. What was once a sure thing, the Nuggets ability to win against bad teams on the road has been called into question with four straight losses to such teams (and six straight road losses overall).

That being said, the Nuggets have been solid against the Grizzlies, having won seven straight games over this franchise of perpetual ineptitude and rarely are these games ever close. And no, this doesn't mean the Grizzlies are due for a win against Denver. It means the Nuggets need to keep their focus strong, take care of business in Memphis tonight and get their fourth straight win.