Share All sharing options for: Lets make Gregg Popovich pay for his arrogance... 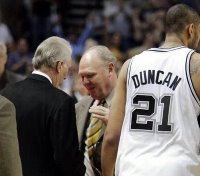 Back on February 3rd, San Antonio Spurs head coach Gregg Popovich decided to screw ticket paying Nuggets fans by resting his three best players - Tim Duncan, Tony Parker and Manu Ginobili - when the Spurs made their second and final appearance of the regular season in Denver. By "resting" his Big Three, Coach Pop all but conceded the season series with the Nuggets, as the Nuggets (barely) won against the Spurs junior varsity squad.

Coach Pop's decision to give away that game had a lot of us in Nuggets Nation scratching our heads, as the Spurs weren't slated to play again until five days later that week. Was Coach Pop sending a signal to Nuggets head coach George Karl that he doesn't take the Nuggets seriously and figures if it comes down to a Game 7 in the playoffs, they know they could beat us on the road? Was he trying to instill confidence in his bench players? Was he teaching his Big Three a lesson after they had taken it easy for three-and-a-half quarters the night before at Golden State? Or was he just being his usual, arrogant self?

Regardless of the reasons, the decision may come back to haunt Coach Pop and the Spurs. With the Spurs losing their second straight game and fourth out of six, the Nugget suddenly find themselves a mere half game back of San Antonio, which is basically like being a half game up by owning that crucial tiebreaker. Moreover, if the Rockets finish second while the Nuggets and Spurs tie for the third best record, the Spurs would end up playing the Lakers in the second round, negating Pop's assumption that he could take down the Nuggets in Denver in a Game 7 as they'd never even meet in the playoffs. (Of course, we can't dismiss the fact that the Nuggets are a mere half game up on New Orleans, one game up on Portland and a game-and-a-half up on Utah.) So as we've watched Houston, Portland and New Orleans take care of business in the last week or so, the Spurs have done the opposite. Making what once seemed like a five-team race for second place in the Western Confernece a six-team race.

But at the end of the day, the Nuggets ultimate playoff position won't be had by relying on the Spurs and those other Western Conference foes to lose. Like the Rockets, Blazers and Hornets have done lately, the Nuggets need to take care of business...on the road. And even though Chauncey Billups has made statements about every game the rest of the way being a "playoff game" I question if his Nuggets teammates and his coach truly buy into that. Just the other day, The Denver Post's Dave Krieger (that sounds weird, doesn't it?) quoted Coach Karl with one of his patented underpromising statements saying: "I think if we go 3-2 or 2-3...it's going to be hard for teams to catch us" when referring to the Nuggets remaining five road games against plus-.500 teams.

I've got news for you George: you won't and don't need to go 5-0 against the Suns, Hornets, Mavericks, Lakers and Blazers (their five remaining road games against plus-.500 teams) to secure a second or a third seed in the conference, but you might have to go 4-1 to pull it off, including winning the next most important game of the season Wednesday at New Orleans. Going 2-3 against this fivesome - especially with a loss to the Hornets - could easily land the Nuggets in the fifth slot, or the fourth with no home court advantage. Either way, this wastes the golden opportunity the Nuggets have to jump a slot ahead of San Antonio thanks to Coach Pop's tiebreaking gift.

I know Coach Karl worships at the alter of all things Popovich. But just as we called it out back in early February, Coach Pop made a colossal mistake by not trying to beat the Nuggets in Denver that Tuesday night when he had the chance to do so. Now it's time for Karl to make him regret it.