Can we end the LeBron/D-Wade vs. Melo debate now?...

Share All sharing options for: Can we end the LeBron/D-Wade vs. Melo debate now?... 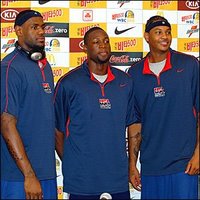 More than at any other time in their respective careers, this past week showed me how wide the delta is between the games of LeBron James and Dwyane Wade and that of their fellow 2003 draftee, Carmelo Anthony.

Beginning last Friday, all three players' teams desperately needed to win every game as home court advantage was (and still is) on the line. LeBron's Cavaliers are fighting for the NBA's best overall record, Wade's Heat for home court in the first round and Melo's Nuggets for home court in possibly two playoff rounds.

During this time span, LeBron and Wade have gone above and beyond the call of duty to keep their teams positioned for playoff success, each leading their respective teams to four wins in five games. Meanwhile, Melo's Nuggets lost three of five, and the two wins were home games against two of the NBA's worst teams...each of whom just happened to be without their best player to boot.

In his last four games (all wins), LeBron James put up three triple-doubles, including Tuesday night when his Cavaliers found themselves down 19 points to the Clippers with nine minutes to go in the fourth quarter. And in the fourth game - Friday night at Sacramento - in place of a triple-double LeBron had 51 points, nine assists, three blocks and two steals while leading the Cavaliers to yet another come-from-behind victory. With his Cavs down 14 to the Kings in the final period, LeBron decided to turn on the jets and go for 22 fourth quarter and overtime points combined. I don't remember exactly what Melo did while the Nuggets were losing in Sacramento five days earlier, but he certainly didn't will them to victory like LeBron did.

Meanwhile, Wade had another fabulous week. Yesterday morning I watched Wade single-handily take down the superior Utah Jazz in three overtimes. Wade needed 50 points, 10 rebounds and nine assists to get the job done, in addition to numerous dives to the floor to secure a loose ball and/or cause a steal or loose ball. And three days ago, Wade led the Heat to victory over the NBA Champion Boston Celtics with a 32-point, seven assists and four steals effort, two days removed from a 48-point, 12 assists, six rebounds, four steals and three blocks effort in leading the Heat to victory over the Chicago Bulls.

During this same time span, Melo hasn't shot the ball over 50% once. Hasn't pulled down more than seven rebounds in a single game. Hasn't dished out more than three assists once. Hasn't managed a steal or a block in two of the five games. And has gotten to the free throw line an average of 5.4 times per game.

I'm bringing this up because in the comments, virtual chats and emails written by the readers of this blog I continue to read things like: "if only Melo played the game like LeBron and D-Wade." Additionally, we have our seemingly annual ESPN.com piece (this time written by Stephen A. Smith) asking why Melo hasn't matched the success of his fellow 2003 draftees LeBron James and Dwyane Wade.

What's the point? The point is that with his sixth NBA season about to conclude, Nuggets Nation needs to accept that Carmelo Anthony will never be in the class of LeBron James or Dwyane Wade and it's time to stop bringing it up. Does this mean drafting Melo third was a bad idea? Absolutely not. Anytime you get a bona fide All-Star you have nothing to complain about. Does this mean that a team with Melo will never win? Double absolutely not. And as I've said on this blog many times before, I cringe to think of a Nuggets team without Melo. After all, the Nuggets have made five (and soon to be six) straight playoff appearances after an eight-season playoff drought for a reason, and we should always keep that in mind when discussing Melo's value to the team.

Simply put (and pardon the cliche), comparing LeBron/Wade to Melo is comparing apples to oranges. And rather than wish for Melo to develop into a LeBron/Wade-calibre player, we should start looking at him as a piece in the Nuggets puzzle, not the solution to the puzzle (if that makes sense). You can compare LeBron and Wade to the likes of Magic, Larry, Michael and Kobe - players so unbelievably good, you only need to type their first names. But the Melo comparisons should be kept to the likes of other shoot-first offensive threats such as Adrian Dantley, Bernard King, Alex English, Dominique Wilkins, Mark Aguirre, Glenn "Big Dog" Robinson and Antoine Walker. Of that group, only Dantley, Aguirre and Walker competed for a championship and only Aguirre and Walker won one, but as the third option late in their careers after their skills had diminished (thanks largely to poor off-season conditioning, by the way).

This doesn't mean Melo won't compete for a championship sooner than his predecessors did and won't do so at the peak of his talents. It just means that if we as Nuggets fans think Melo is carrying the team to a championship on his own, we're fooling ourselves. Six NBA seasons is a pretty good sample size. Fortunately for Nuggets fans, Melo has players around him that could be the right pieces for a championship run in Chauncey Billups, Nene and J.R. Smith. I'd take Chauncey, Nene and J.R. over LeBron or Wade's top-three teammates any day of the week. But because Melo is who he is - an All-Star but not a superstar - the Nuggets clearly need another piece or two, or simply more depth (and probably a different coach) to get to the promised land.

So let's end the LeBron/D-Wade vs. Melo comparisons and just be glad that with the Nuggets third pick in 2003, we scored a perennial All-Star and not another Raef LaFrentz.