BRING BACK BIRDMAN: The petition is live!...

Share All sharing options for: BRING BACK BIRDMAN: The petition is live!... 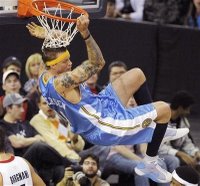 I took my girlfriend to her first ever Nuggets game on Saturday night and she now finally appreciates why I prefer attending games live to watching them on TV: Rocky and the Birdman.

We can get into the innumerable and immeasurable benefits of Rocky later because he's not going anywhere. But the more pressing issue fast approaching us is whether or not Chris "Birdman" Andersen will be back in Denver for the 2009-10 season. And I know I'm not the only one worried about the Birdman's fate as a Nugget, because the emails have been coming in several times a day recently asking me to do something about getting Andersen re-signed.

Since I don't have a direct line into Nuggets owner Stanley Kroenke or the organization's upper management, I've decided to start a petition titled BRING BACK BIRDMAN. The goal is pretty simple: I want to get as many signatures as possible before the Nuggets season is over (including the postseason) and then turn the list in to Vice President of Basketball Operations Mark Warkentien, Vice President of Player Personnel Rex Chapman, Vice President of Team Development Josh Kroenke, Advisor Bret Bearup and Director of Media Relations Eric Sebastian. IF we get enough signatures fast enough, I'll personally hand the list to as many of these guys as possible during one of the playoff games. In addition to promoting the petition on this blog, I'll be reaching out to all the other Nuggets bloggers to promote the cause, as well.

The case for re-signing Andersen should be fairly obvious to the readers of this blog and among the members of Nuggets Nation worldwide. But that doesn't mean his re-signing is a no-brainer among the Nuggets' top brass. As the In Denver Times Chris Tomasson reported recently, Kroenke's alleged insistence on staying below the NBA's $70 million luxury tax threshold could mean the Nuggets will only offer Andersen a low ball contract. This would likely send Andersen flying (pun intended) to another team willing to pay more.

Just like any cause worth fighting for, you have to have a good argument. Here is the Denver Stiffs argument for re-signing Chris "Birdman" Andersen...

Reason #1: Birdman is the best backup center in the NBA.

And frankly, Andersen is better than a handful of the league's starting centers. I don't know about you, but I'd rather have Birdman on the floor than Joakim Noah, Carmelo Anthony-hand-breaker Jeff Foster, Nick Collison, Erick Dampier, Samuel Dalembert, and whoever starts for the Sacramento Kings these days. And we could have a lengthy argument about Andersen versus other starting centers such as former Nugget Marcus Camby, Chris Kaman, David Lee, Greg Oden (currently) and Brendan Haywood (when healthy). 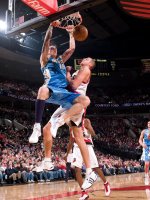 I understand Kroenke's unwillingness to exceed the luxury tax threshold, but in regards to Andersen's potential salary a little perspective is in order. Even though Andersen will be due for a significant pay increase, his history as a flight risk (pun intended) having previously been banned by the NBA for substance abuse combined with no other owner wanting to exceed the tax threshold will keep his market value in check. Moreover, I believe the Nuggets will get a bit of a home town discount as Andersen has insisted he wants to stay in Denver, and his coach and teammates have been vocal in saying they want him back. 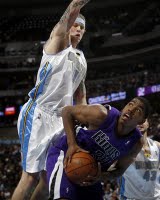 Reason #3: Birdman has a lot of game left in him.

Even though he's turning 31 in July, I believe Andersen has at least two seasons in him at his current level and another one or two beyond that at a decent backup center level. In his seven NBA seasons, Andersen has never played 82 games, has never logged more than 22 minutes per game (his career MPG average is only 17:06) and as we all know, he missed most of 2005-06, all of 06-07 and all but five games of 07-08 because of his banishment from the NBA due to substance abuse. Andersen also hasn't participated in a deep playoff run (hopefully that will change this season), nor has he logged a lot of minutes playing offseason basketball. From my cheap seats vantage point, I'm guessing Andersen is 31 going on 29. 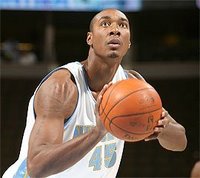 Reason #4: Nene and Kenyon Martin cannot be counted on to be healthy, and Johan Petro and Steven Hunter don't qualify as "Big Man Insurance."

Speaking of backup centers who are grossly overpaid, Steven Hunter is due to make $3.7 million next season, after taking $3.5 million this season. Now that guy has a good agent, especially if you consider he (allegedly) may not ever play again.

When it comes to the Nuggets big man situation, the organization's brass can't have it both ways: count on Nene and K-Mart to log most of the "big man" minutes and not re-sign Andersen, who's been our savior at the backup center/power forward position this season given that neither Nene or K-Mart can play advanced minutes. As documented on this blog before the season began, the power forward position has been perpetually cursed in Denver. We've had somewhat of a reprieve from the curse this season (although K-Mart has been in and out of the lineup due to back spasms and Nene's missed a few games, too), but it's a lock to rear its ugly head again at some point soon. And while we sincerely appreciate the effort put forth by Johan Petro when he gets the opportunity, it's clear that's he a third-string backup center, not your primary big man reserve off the bench.

Not to be too dramatic about it, but losing Andersen as the primary backup big man to two injury prone players could make the potentially third-seeded Nuggets into a seventh-seeded team. 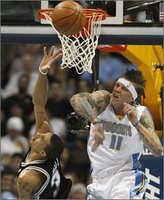 Reason #5: Not re-signing Birdman is slapping Nuggets fans in the face.

If the Nuggets decide not to re-sign Andersen simply to stay under the luxury tax, this is a slap in the face of the fans who have paid good money in a horrible economy to keep the Nuggets fiscally afloat this season. According to ESPN.com's NBA attendance report, the Nuggets are averaging 17,225 sold tickets per game (89.9% of Pepsi Center capacity). This is the result of a team that's competitive and fun to root for thanks to "blue collar" guys like Andersen and his teammates Chauncey Billups, Renaldo Balkman and Nene. Like Billups, Balkman and Nene, Andersen not only makes the Nuggets a more competitive team on a nightly basis, but he keeps the home fans enthused every minute he's on the floor.

I respect and appreciate the stability and willingness to win that Nuggets owner Stanley Kroenke has brought to professional basketball in Denver. I also know that Kroenke cares about what the fans think (hence his push to sign a big free agent during the summer of 2004 that led to the ill conceived trade-and-max-signing of Kenyon Martin). Simply put, not re-signing Andersen just to save a few million dollars would be penny-wise, pound-foolish. Perhaps Mr. Kroenke lost about half his net worth like the rest of us have during this financial crisis, but I'm pretty sure he can afford to reward the fans for the loyalty we've shown this season. Re-signing Andersen would go a long way to show that Kroenke is still committed to winning in Denver and winning now.

[UPDATE] I've purchased the URL www.bringbackbirdman.com and within 24 hours it should forward to this link. I'll let everyone know when it's up and running!