So much for that feel good story...

Share All sharing options for: So much for that feel good story... 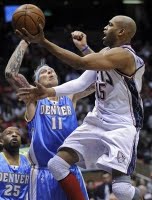 Nuggets/Nets Recap...
When previewing tonight's Nuggets/Nets matchup, I probably should have mentioned that of the Nuggets 16 losses entering tonight's contest, six were the result of playing their third game in four nights.
So much for 20-1 against sub-.500 teams.
When forecasting this road trip, both Denver Stiffs and this blog's readers had the Nuggets down for at least two losses: at New Jersey tonight and at Orlando on Wednesday. The problem was that after watching the Nuggets dismantle the Wizards last night, we were lulled into falsely thinking that the Nuggets would beat the Nets tonight.
There's no shame in losing to the Nets in New Jersey. This team has decent talent. What is shameful is the following...
...giving up more than 60 points to an inferior team for the second time in three games.
...scoring a season low 70 points, 11 less than the previous season low.
...allowing the Nets to come within one point of their franchise record 45 points for largest margin of victory ever.
...losing by 27 more points than the Nuggets previous biggest loss of the season.
A poor effort is always inexcusable and it was sickening to watch this game from start to finish. But the Nuggets were due for a bad loss against an inferior opponent (although not this bad of a loss). Let's just hope they don't make a habit of it.
Two feel good stories go head-to-head (Nuggets/Nets Preview)... 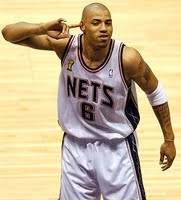 While I'll always be a Nuggets fan first and foremost and generally want the other 29 NBA teams to fail, every now and then there are other teams in the NBA that I root for.

Before the Nuggets got into it, the Nets were already well into their cost-cutting phase, having turned an NBA Finals-caliber team (to be fair, during the Eastern Conference's weakest point ever) into a mediocre outfit over the years as they save money in advance of moving to Brooklyn. By the way, is that actually happening still?

Going into this season, the Nets ranked 27th in payroll and like the Nuggets, the national NBA punditry left them for dead (including me). With the exception of former superstar (and still All-Star in my opinion) Vince Carter remaining, the rest of the Nets were a collection of NBA also-rans (like Keyon Dooling, Eduardo Najera, Trenton Hassell and Bobby Simmons), first or second year players (like Ryan Anderson, Chris Douglas-Roberts, Yi Jianlian, Brook Lopez and Sean Williams) and young players yet to live up to their potential (like Josh Boone and Devon Harris).

But a weird thing happened on the way to the cellar of the Eastern Conference. The Nets played their asses off under head coach Lawrence Frank. Despite being injury prone, Carter has appeared in all 50 games and has been productive with 20.9 ppg, 5.1 rpg and 4.8 apg. Oh, and he's had a few game winners and game tying shots, too. Those first and second players are producing, too, including Anderson who's really heated up as of late and center Brook Lopez who was just named the Eastern Conference's Rookie of the Month for January (I feel bad for Nene already).

But the star of the season in New Jersey has been Devin Harris, and no one loves this more than me as I'm a career-long Jason (the poor man's Fat Lever) Kidd hater. And to think the Mavericks threw in two number one picks along with Harris to acquire Kidd last season?! Ha!

Nets' President Rod Thorn fleeced the Mavericks on that deal (just as he fleeced the Nuggets and, in the irony or ironies, Nets' GM Kiki Vandeweghe on the Kenyon Martin deal five years ago). The Kidd-for-Harris trade is what I call a "Double Whammy", meaning not only did the Mavericks get worse by acquiring Kidd, but they mortgaged their future to obtain him. The Kenyon Martin trade - as discussed ad nauseum on this blog - was once a "Double Whammy" for the Nuggets. But let's give credit where credit is due: K-Mart is doing everything he can this season to earn that max money (remember, he didn't offer himself the max contract, he just signed the deal). K-Mart could have gone the route of Darius Miles, Stephon Marbury and the many bad contracts before him and called it a career. Instead, K-Mart has taken personal responsibility for his health and his game, and it shouldn't be surprising that he was voted co-captain this season.

For the first time since he arrived in Denver in 2004, K-Mart should be at full strength when he plays against his former team at the Meadowlands tonight. It will be a match up of two of the NBA's best "feel good stories" from 2008-09. No one (except me) thought the Nuggets would make the playoffs, and now they have a shot at the second seed in the Western Conference. Similarly, no one (including me) thought the Nets would make the playoffs, and they could finish seventh or eighth in the Eastern Conference.

I'm sensing a close game in the swamp tonight. But thanks to the Wizards laying down for us last night, the Nuggets should be able to pull this one off.