Was this road trip a success?...

Share All sharing options for: Was this road trip a success?... 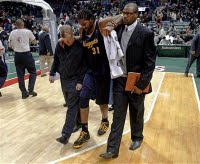 First off, please accept my sincere apologies for coming late to the party here. I've been jamming on comic strip deadlines all day and finally got around to finish watching the Nuggets/Bucks game, which turned out to be yet another inexcusable debacle for the second season in a row. And worse yet, potentially a heart breaker as Nene went down with a "knee contusion" (that means just a bruise, right? right?!) late in the game.

Before the Nuggets embarked on this eight-game road venture, Denver Stiffs predicted a 5-3 record when all would be said and done. And the Nuggets did, indeed, finish 5-3.

And yet I feel like this road trip was a failure in some respects, and here's why...

In that post on February 4th, I figured the Nuggets would lose to a hot Thunder team, a Nets team as a trap game and then in Orlando right before the All-Star break. I never thought the Nuggets would be a praise-worthy 5-1 going into this weekend's affairs at Chicago and Milwaukee. And when they did, I figured at worst the Nuggets would split the games and end up on this roadie a respectable 6-2 and, thus, 38-18 on the season. Instead, by giving up 120 and 116 points to a depleted Milwaukee and Chicago team, respectively, the Nuggets suddenly find themselves a mere 1.5 games ahead of Portland.

Just when George Karl and his on-the-floor surrogate Chauncey Billups (or, maybe it's the other way around. Chauncey Billups and his on-the-bench surrogate George Karl) had the Nuggets "respecting the regular season" by routinely beating the NBA's lesser teams, the Nuggets have dropped three games to such teams in their past six outings. And they've done so with alarmingly bad defense and a lack of focus on the offensive end down the stretch. Are these just your typical mid-season blues that the Nuggets will overcome with some home cooking? Or are there more systemic problems at work here, such as the Nuggets' lack of depth in the front court coming back to haunt them in the form of exhaustion and injuries? Or Karl's insistence on playing Anthony Carter with Chauncey Billups down the stretch, only to be torched on defense by bigger, more athletic guards? (Ahem, remember Dahntay Jones and Renaldo Balkman are on the roster).

Karl and his Nuggets need to right the ship fast, or home court advantage in the first round of the playoffs will disappear quickly. They need to refocus on taking care of business when playing sub-.500 teams, and renew their commitment to defense and effort that was so readily on display in advance of the All-Star break.

Oh, and Nene and Kenyon Martin better get healthy quickly, because the Celtics, Hawks and Lakers are coming to town this week. Gulp.

With the Nuggets playing in Milwaukee today, I thought I'd turn to a true Bucks insider to get the scoop on what the Nuggets can expect. That insider would be my 97-year old grandmother, who lives in Milwaukee and has watched just about every televised Bucks game for the past 60 years.

According to my grandmother, "Ramon Sessions' 44-point game a few weeks ago must have gone to his head, because he hasn't done a darn thing since. The Bucks are playing alright considering they've lost Michael Redd for the season and Andy Bogut to back problems. I think Andy Bogut is great. He's always there, always on top of things. If he's under the basket, you know he's putting the ball in. Richard Jefferson goes hot and cold. Some nights he's just not with it, misses a free throw, etc. You know who's pretty good? Francisco Elson. He's good at the free throw line and he's very intense. And I love Via Via (referring to Bucks' forward Charlie Villanueva) but despise Gadgy (referring to Bucks' backup center Dan Gadzuric). Gadgy never keeps his eyes on the ball. It's like he's not paying attention. Then I look in the paper the next day and I say, wow, 6 points. And the reason they're not getting rid of him is his salary is so high, so they're stuck with him. But I was glad they didn't trade Sessions, Jefferson or Via Via at the trade deadline. Now we'll have to see what happens in free agency."

When asked about today's matchup with the Nuggets specifically, she offered "I don't think the Bucks will have much luck against the Nuggets. The Nuggets would have to be very sluggish to lose today. But of course, I can't stand George Karl. I didn't like him in Milwaukee and I still don't like him."

And there you have it. Everything you need to know about the Bucks.