Saying goodbye to my morning newspaper...

Share All sharing options for: Saying goodbye to my morning newspaper... 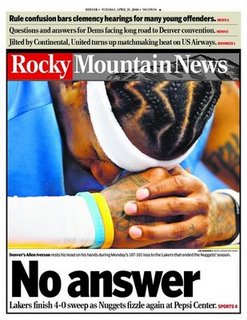 As I'm sure all of the Denver area readers of this blog have heard, the Rocky Mountain News is officially shutting down as of tomorrow.

This may sound bizarre coming from a blogger, but this news is deeply saddening.

If you don't mind, I'm going to talk about the Rocky in personal terms and then discuss the broader state of newspapers, sports journalism and the role sports bloggers play in all this.

If you can think back to the late 1970s, entire 1980s and the first half of the 1990s, I grew up in an era in which we got our sports news, scores and commentary from the daily newspaper. It almost sounds surreal nowadays, but we actually had to wait until the next day to see how Alex English shot in the game the night before, or how many rebounds LaPhonso Ellis grabbed, or where the Nuggets were in the standings. If we were lucky and the NBA page had some extra room, we'd get to see who the league leaders were in points, rebounds and assists. And Sundays were the best, because the NBA beat writer would be given an entire page with which to recap the goings on in the NBA, trade rumors, trends, and so forth.

I grew up in a Rocky household. Depending on who got to the breakfast table first in the morning, my brother and I would squabble over who got to read the Rocky's sports section first. The loser got the comics, and then we'd swap. Growing up reading the Rocky, my heroes were columnist Bob Kravitz, Nuggets beat writer-turned-columnist Dave Krieger, and sports editorial cartoonist Drew Litton. Other than broadcasting a Nuggets game, as a kid I thought these guys had the best jobs in the world and they inspired me to get into sports journalism and cartooning.

One of my favorite childhood memories (as mentioned on this blog before) was meeting Drew Litton when I was about 10 years old. I was already dreaming of a career in comics and/or sports, and my dad was able to get Drew to meet with me. Seeing a professional cartoonist at work was a dream come true, and Drew was very gracious with his time and encouraged me to keep at it. I got to meet Drew again when at the age of 21 I came to him for advice on how to launch my own comic strip. He gave me invaluable advice which led me on the path to being syndicated in newspapers nationwide. We bumped into each other yet again at last summer's San Diego Comic-Con, and have regularly kept in touch ever since. So Drew immediately came to mind today when I heard about the Rocky's dismantling. I'm rooting for Drew to end up at the Post, because I can't imagine Denver sports without Drew Litton's cartoons.

Also in my thoughts today is Chris Tomasson, who tirelessly covers the Nuggets for the Rocky so bloggers (like me), columnists, broadcasters and just about anyone else who opines about the team has accurate information from which to form their opinions. When I launched www.firegeorgekarl.com last February, Chris - doing his usual due dilligence - was the first reporter to reach out to me for an interview and the first reporter to bring up the blog to George Karl in person. We've been friends ever since.

Since I split my time between Los Angeles and Denver, when the Nuggets played at Staples Center this season Chris and I have gotten together for dinner. And even though we're friends and I try mightily to get the off-the-record inside scoop on the team out of him, he upholds his journalistic integrity and tells me the same things he tells all of you in his column. So we end up talking about all the countries he's been to (an amazing 55 total) and all the countries I want to go to (I'm at 26 and have a long way to go to catch up).

I actually spoke with Chris this week. He asked me if I had any Nuggets/Lakers stories to share with him for his Friday column. I passed on the story of how my Benedict Arnold Lakers' fan of a brother got to meet Magic Johnson before the November 15, 1988 game at McNichols and then Magic ended up winning the game for the Lakers on a 30-foot three point shot...at the end of double overtime! I don't know if this story will make its way into Chris' final column tomorrow or not, but right now I'm just hoping Chris gets to take some time off and pad that country list.

The next person I want to mention is Dave Krieger. I've never met Dave in person, but when I wrote about the Denver Stiffs Hall of Fame last summer, Dave reached out to me with kind words of support about this blog and offered a lengthy definition of what it truly means to be a Stiff. Before Chris joined the Rocky, Dave covered the Nuggets and did so through some pretty lean years when no one cared about the team except die hard fans, Rocky the Mountain Lion and Dave himself. He's since gone on to be a terrific sports columnist and I can only hope I'll be reading his work somewhere else soon.

Since the sad news about the Rocky broke, I haven't corresponded with Drew, Chris or Dave, but hope to do so in the coming days. Right now I'm just wishing the best for them and their families. I know they knew the shuttering of the Rocky was coming, but perhaps not as abruptly as it's turned out to be.

What do we make of the end of the Rocky Mountain News? The future of newspapers has been much discussed lately with papers downsizing or shutting down completely, Walter Isaacson proposing a micropayment/iPod type model (which will never happen) and the new Amazon Kindle being looked upon as a potential savior of the print news industry. I don't have the answers for monetizing newspapers, but I do know this: we need its content and most importantly, its journalists.

Looking at things from the perspective of sports, what blogger is going to break the news about a big trade? A season-ending injury? Turmoil in the locker room? Management strategy? The signing of free agents? Follow the team to every road game? And so on. Benjamin Hochman does a fine job at the Post, but should he be the only journalist covering a team that represents and is supported by a community of over two million people plus its fans worldwide?

This is not to say that sports blogs don't hold an important role, because I (most obviously) believe they do. I think a lot of newspaper executives and perhaps the public in general feel as though blogs are taking over what was once considered journalism. But I want to emphasize with whomever is reading this is that we need both - the traditional journalist and the blogger. While the journalist presents us with the facts surrounding the team, we fill the editorial gap from the fan's point of view not expressed in the newspaper. There's plenty of room for both, and it's a damn shame that neither newspaper executives like those from the E.W. Scripps Co. (who "owned" the Rocky) or the advertisers that could fund both our enterprises realizes this yet.

Simply put, without the work of someone like Chris Tomasson there are no sports blogs like Denver Stiffs. After all, how else am I going to get those condescending, sarcastic, throwing-the-players-under-the-bus George Karl quotes to rant about?

The Rocky Mountain News will be sorely missed.