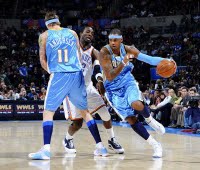 I just finished watching the Nuggets eeeek by the Thunder thanks to fantastic performances by Carmelo Anthony, J.R. Smith, Nene and whoever the referee was that called Melo's turnover with 30 seconds left a kicked ball by the Thunder (even though no Thunder player ever came close to kicking the ball). But losers find a way to lose and winners find a way to win. And our Nuggets, my fellow Stiffs, are winners.

It's never good to see your favorite team spot one of the NBA's worst teams 70 first half points. But with Chauncey Billups and Kenyon Martin sitting and the rest of team clearly worn out thanks to a (unnecessary) battle with the Spurs reserves the night before, this goes down as a great win in my opinion. The fact that the Nuggets consistently figure out ways to pad the win column in the face of adversity is a great sign of things to come. Throw in Melo taking ownership in tight end-of-game situations, a la the Melo of 2005-06, and the Nuggets should fare better than Denver Stiffs' prediction of 5-3 on this road trip (remember, I had tonight's game against Thunder as one of those three potential losses).

The Nuggets have earned a much needed rest before Friday's game at Washington. Go Nuggets!! 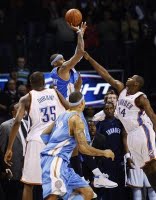 As stated in this morning's post on the Nuggets upcoming road trip, the Thunder are playing much better as of late under former Nuggets assistant coach Scott Brooks.

Moreover, the Nuggets exerted much more energy than should have been necessary to beat the Spurs' JV team in Denver last night. Throw in the possibility of Chauncey Billups and Kenyon Martin being out tonight, and it looks like we're in for the Nuggets second straight dogfight in Oklahoma City. (Even Vegas thinks so. The line on the game is Nuggets +2!)

Let's hope this one doesn't require a Carmelo Anthony miracle three-pointer to seal the deal.