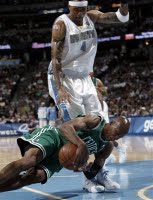 Are we sure this game wasn't on TNT? Because the Nuggets played as if they were.

Or perhaps the Nuggets mistook the Celtics' green and white uniforms for the Lakers' purple and gold, because this mirrored their typical outing against the Western Conference champs: scared, out-of-sync, whiny, dreadful shot selection and only J.R. Smith and Linas Kleiza bothered to show up.

All I could think about while watching this game was of all the fans who must have spent their hard earned money on their lone Pepsi Center visit of the season - maybe take their kids, etc - only to see the Nuggets reward them with a dog@#$% effort.

Denver Stiffs has been very bullish on the Nuggets all season and won't give up on them because of a three-game losing streak. And of course, all teams go through ups and downs. But this recent spate games are alarming in how badly the Nuggets are being exposed on both ends of the floor...and not against necessarily good teams (remember, the Celtics didn't have Kevin Garnett tonight). Fans don't expect their teams to win every game, nor do we expect every game to be close. Some nights you just don't have it, especially against the NBA's elite. But the Nuggets have had one too many nights where they "just don't have it" against the NBA's best and, worse yet, these games have been at Pepsi Center. The evidence...

How can the Nuggets expect to contend in the postseason when the NBA's premier outfits routinely clobber them in Denver? The only answer is: health. I know it sounds ridiculously obvious, but the Nuggets have to be at full speed with a fully healthy roster or this team is doomed. Not unlike any other NBA team were it to lose a key starter, the Nuggets can't seem to get by with Kenyon Martin or Nene. They must have Kenyon Martin and Nene. Somehow, they were able to go 6-4 without Carmelo Anthony for a 10-game stretch, but most of those games were at home and early enough into the season that the team wasn't worn out. Now I'm scared stiff of how this team will play without K-Mart and Nene for a prolonged stretch. I guess we'll find out this week, with Nene expected sit out through the Lakers affair on Friday.

Continually perplexing is George Karl's refusal to build consistency in the rotation and not play Renaldo Balkman. On a night when the Nuggets were clearly gassed and in dire need of an energy boost, why the @#$% wasn't Balkman on the floor and on the floor early?! I know its ironic that the lone Rastafarian on the Nuggets roster happens to be the guy with the most energy (along with J.R. and Birdman), but that's the truth. In his 17 starter's minutes the day before at Milwaukee, he put up 10 points, three rebounds, two assists, three steals and a block. I'm pretty sure he'd have been helpful tonight as a thorn in the Celtics' side.

I never thought a random regular season game against the Atlanta Hawks would be a "must win" for the Nuggets, but it's almost come down to that. From a psychological perspective, it's imperative that tonight's loss to the Celtics merely tie the Nuggets longest losing streak of the season at three games, rather than be one loss among five straight. Because when the team that actually wears purple and gold shows up on Friday night, the Nuggets better not be pressing to avert their fifth straight loss.

Entering tonight's game, the Nuggets and Celtics have two things in common: they'll both be without their best big man and both played yesterday afternoon. Other than that, they have nothing in common. While the shorthanded Celtics waxed the improved (but shorthanded) Suns in Phoenix yesterday, the Nuggets found themselves in a prolonged and unnecessary dogfight with a less-than-mediocre Bucks team. And while the Celtics continue to exude confidence when they play, confidence appears to be completely absent from the Nuggets.

Making matters worse, the Portland Trailblazers are breathing down the Nuggets' necks and the Utah Jazz are about to be at full health. So the Nuggets recent reversion into the same team we saw last year (regularly giving up 70-point halves to bad teams, inconsistent rotation patterns, no cohesive offensive sets, and so forth) has arrived at the most inopportune time, and I'm concerned that the Nuggets know this and could play tight all week as a result.

But heretofore, the Nuggets have rebounded from these types of situations all season long. Over the course of their first 56 games, the Nuggets have lost twice in a row only three times, and have lost three games in a row just once. So while we're all very frustrated with what went down over the weekend, I'm okay with giving them the benefit of the doubt until this week plays itself out when three very good teams come to town: Boston, Atlanta and (oh lord) the Lakers.

That being said, it is at moments like this where George Karl, Carmelo Anthony and Chauncey Billups need to earn their multi-million dollar salaries (that we pay for, mind you). They've given us very little - if any - reason to abandon our faith in them throughout the season thus far. Don't let this be the week that the fans lose hope.