Somehow, the Nuggets beat the Magic without the services of Winston Garland...

Share All sharing options for: Somehow, the Nuggets beat the Magic without the services of Winston Garland...

Memo to NBA coaches: do you still think Carmelo Anthony isn't an All-Star? What a joke.

As noted in the Nuggets/Magic Preview post below, the Nuggets hadn't won a game in Orlando since Winston Garland started at point guard. 16 years of futility in Orlando? It was nice knowing you.

A lot of people might call this an "ugly game" but I absolutely loved seeing the Nuggets win a game in which they only scored 82 points. It goes against everything Nuggets basketball has been over the years and was a microcosm of how seriously the Nuggets are committed to defense (most of the time) this season.

Finishing the first portion of their eight-game road trip a most respectable 4-1, the Nuggets have earned themselves a much needed All-Star break. 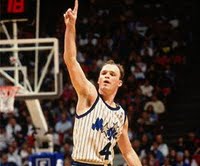 The Nuggets haven't won in Orlando since this game, which took place on March 10, 1992. Reggie Williams was the Nuggets leading scorer that night with (Denver Stiffs Hall of Fame inductee) Mark Macon putting up a respectable 18 points. I'll have to do some digging later but I'm assuming that was the best game of Macon's pro career. Even Winston Garland broke into double digits scoring in that game with 10 points. How bad was that Magic team? They started Anthony Bowie, Terry Catledge, Scott Skiles, Stanley Roberts and Jeff Turner on their way to 21 total wins. The joke would be on the Nuggets at season's end, however, as the Magic's 21 wins helped them score the number one pick while the Nuggets' 24 wins dropped them to the fifth pick. So maybe if the Nuggets hadn't beaten Orlando 17 years ago, they'd have ended up with Shaquille O'Neal instead of (Denver Stiffs all time favorite Nugget) LaPhonso Ellis.

Although who am I kidding? The NBA would never allow the Nuggets to get the first pick in any draft ever. But it's still fun to speculate.

Back to the matter at hand. The Nuggets have lost 15 consecutive games at the Amway (Amway? really?) Arena. This is the most consecutive wins for the Magic at home against any opponent in the NBA. And the only reason it's not 16 consecutive losses for the Nuggets is because the two teams didn't meet in the lockout-shortened 1998-99 campaign.

If the Magic hadn't sha-lacked the Nuggets in Denver just a few weeks ago, I'd be very optimistic about this game tonight. But Jameer Nelson or no Jameer Nelson, the Nuggets will once again be pounded by Dwight Howard on the inside while the Nuggets' perimeter players tie themselves in knots trying to chase down the barrage of three's coming from Hedo Turkoglu, Rashard Lewis and Mickael Pietrus. Oh, and Orlando just crushed the same Nets team that crushed the Nuggets last Saturday.

So while I'd love for our Nuggets to squeak in one more victory before the All-Star break, I'm not counting on it.