Gregg Popovich doesn't care about home court in the playoffs...

Share All sharing options for: Gregg Popovich doesn't care about home court in the playoffs... 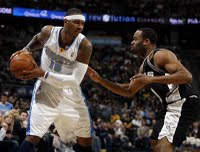 I feel like the Nuggets lost tonight. I know they didn't actually lose (I'm not that stupid), moved within a game of the Spurs in the overall conference standings and now own the tiebreaker for the playoffs should they finish with the same record as San Antonio. But with a long road trip starting tomorrow and the Spurs playing their JV squad, the Nuggets should have been able to rest their starters - even sans Kenyon Martin - and we fans should have been watching Johan Petro and Sonny Weems duke it out with Malik Hairston (whom I'd never heard of until tonight) and Ime Udoka. Instead, the Nuggets needed all 37, 36 and 35 minutes that they got from Carmelo Anthony, Nene and J.R. Smith, respectively, to pull this one out. Oh, and Chauncey Billups tweaked his ankle along the way, too.

I'll take a win anytime of any shape and size, but this wasn't the challenge the Nuggets (and their fans) were hoping to get from San Antonio tonight. By resting most of his key players, Coach Pop was telling George Karl and the Nuggets that he's not concerned about home court advantage should these two teams meet in the second round of the playoffs. In fact, Pop is so confident that the Spurs will beat the Nuggets in a seven-game series (and heck, why shouldn't he be?), that he's willing to concede the season series...in February!

I hope the Nuggets get the chance to prove Pop wrong.

The no excuses game (Nuggets/Spurs Preview)...

As Chris Tomasson pointed out in the Rocky Mountain News the other day, the Nuggets are 19-1 against sub-.500 teams and 12-15 against teams that are .500 or better. One of those 12 wins against a plus-.500 team is a bit misleading, and one of those losses was quite possibly the Nuggets worst of the season thus far.

Both games were against the Spurs.

On November 19th, the Nuggets won in San Antonio 91-81 and I remember everyone being abuzz about this victory. Not me. The Spurs had just played three games in four nights, had been besieged by injuries, and were without Tony Parker and Manu Ginobili when the Nuggets came to San Antonio to knock them out. Hardly a noteworthy victory, but the Nuggets and the Denver media sure made it out to be one.

The Spurs would soon get their revenge, however, when they walloped the Nuggets 108-91 at Pepsi Center on December 4th - a game aired on TNT so the whole country could see the Nuggets quit in a big home game against a big conference rival. For the record, the Nuggets seem to be cursed when they play on TNT, having lost three of the four games broadcasted by Turner Sports this season (two of them total blowouts...at home). With tonight's Nuggets/Spurs game being aired on NBATV which is now run by Turner Sports, lets hope the curse doesn't apply.

Turner Sports jinx or not, the Nuggets have no excuses not to beat the Spurs tonight. Yes, the Spurs are playing much better now than they did back in December (they've won four straight, and eight out of ten). But the Spurs managed to get themselves into an exhausting overtime dogfight in Oakland against the Warriors last night, which saw them overcome a 12-point deficit with nine minutes to play. Meanwhile, the Nuggets haven't played since Friday.

Oh, and lest I forget that that only two games separates Denver and San Antonio for second place in the Western Conference. So tonight's game is quite important for an assortment of reasons.