Share All sharing options for: Ben Gordon 2, Nuggets 0 (and check out this stat)... 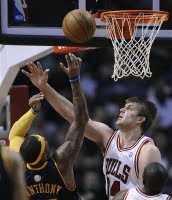 Let's just say one of those two players repeated said performance tonight, and it wasn't J.R. Again, Gordon torched the Nuggets. And again, for 37 points (but only four three-pointers this time).

I won't make a big deal out of the Nuggets giving away a 12-point first half lead, because that happens to all teams all the time. What bothered me most was the Nuggets' - and Carmelo Anthony's perfomance in particular - lack of aggression in the second half. Simply put, the Nuggets probably aren't winning games when Melo shoots 5-18. But they have zero chance of winning if he shoots poorly and makes the situation worse by taking only four free throw attempts.

Moreover, I did some digging into the Nuggets game-by-game results to date and discovered that the Nuggets are 32-8 when they shoot more free throws than personal fouls committed. Conversely, they are 5-10 in games when they commit more fouls than free throws attempted - like we saw against the Bulls tonight (the Nuggets had 26 fouls compared to 21 free throws attempted). I'm sure this stat holds true for most teams, as it indicates how aggressive and energetic a team is. If a team is sluggish, they foul more and get to the line less, hence the Nuggets poor outing tonight.

So when the Nuggets face off against the Bucks in Milwaukee on Sunday, they should focus on getting to free throw line more and cutting down on the fouls to avoid losing to the Bulls and Bucks back-to-back for the second season in a row.

Believing they can squeak into the playoffs so they can have the privilege of getting swept by the Celtics, Cavaliers or Magic, the Bulls made their usual pre-trade deadline deals this week, bringing in former Bulls Brad Miller and Tim Thomas, along with John Salmons, Jerome James and Anthony Roberson.

I say the Nuggets should ruin their welcome-to-Chicago party tonight.

Not only am I looking for the Nuggets to route another bad NBA team tonight, but I'm looking for the Nuggets to avenge last year's debacle in Chicago (which led to the launch of www.firegeorgekarl.com, by the way). On February 22nd of last year, the Nuggets gave up 68 points to the Bulls at halftime and squandered one of the great performances in Nuggets history when J.R. Smith made a Nuggets record eight three-pointers on his way to 43 points in a 135-121 Bulls victory. To put that game into historical perspective, the Bulls' 135 point outburst was their franchise's most since scoring 140 when MJ played for them in 1991.

When looking at the Nuggets eight-game road trip a few weeks ago, I didn't foresee them losing a single game on the back three games. (Of course, I thought they'd lose more than one road game by now, too. Shows you what I know.) I'm standing by that prediction and am looking forward to a Nuggets victory tonight.

On a side note, it seems like the virtual chat on the right side of the blog is a hit among the readers. I've seen several comments and emails thanking me for putting it up, so I want to thank Denver Stiffs' reader "goldennugget" again for suggesting it. I do hope, however, that you'll continue to post comments so your thoughts aren't overlooked.