Did the Nuggets actually win this game?...

Share All sharing options for: Did the Nuggets actually win this game?... 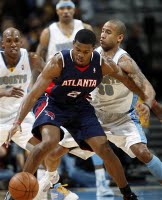 It looks like the Nuggets' Houdini impersonation that enabled them to escape seemingly desperate and/or impossible situations earlier in the season has returned. At least for one game.

The Nuggets will learn nothing from this win over the Hawks tonight.

They were sloppy on offense (how many fourth quarter turnovers did they have, 10?) and lazy on defense (how many times did a Hawk player have a wide open lane to the hoop with no Nugget in his way, other than to slap them on the wrist and give the Hawk player a three-point play). While this might work on the Hawks (who should have won despite playing without Mike Bibby and Josh Smith), if the Nuggets play at all similarly when the Lakers come to Pepsi Center on Friday, the Lakers will rival the Celtics' 38-point blowout for the Nuggets worst home loss of the season.

As usual, Chris Andersen gave a fabulous effort tonight, complemented by great offensive performances by Chauncey Billups and Carmelo Anthony and some clutch shooting from J.R. Smith (as long as its not from the free throw line). But I must admit I'm finally coming around to seeing why this blog's readers can't stand Anthony Carter. His play was dreadful yet again and detrimental to the team, and yet head coach George Karl put A.C. into the game at the end to "defend" against the Hawks' tall backcourt (even though J.R. was red hot and Dahntay Jones played well when given the minutes).

Not only did A.C. have four turnovers on the night, but his matador defense allowed Joe Johnson and Flip Murray to dash right by him all night, including the crucial end of the game. Had the two Hawks' guards not fumbled the play, Murray wins this game with A.C. staring at his backside. Maybe that would have been Karl's wake up call not to have a short, slow backcourt on defense in clutch situations (it didn't work all of last season with A.C. and A.I., so why would it work this season?!). But since the Nuggets won, Karl won't change a thing. And thus, this victory regrettably gave me no confidence that the Nuggets will beat the Lakers on Friday.

On a side note, we need more from Melo on the defensive end. Check out what Melo's small forward opponents have done against the Nuggets over the past few games...

Granted, Melo doesn't guard these guys on every possession, but they are his primary defensive assignment and these numbers are alarmingly bad. If Luke Walton goes for more than 12 points on Friday, I'll completely freak out.

Before the NBA All-Star break (which was literally two weeks ago today), the central debate here at DenverStiffs.com was whether or not the Nuggets could survive a second round series without home court advantage.

Today, we're debating whether or not the Nuggets can still make the playoffs and even if they do, whether or not they'll win their first opening round series victory since 1994. That's what three straight losses (two to bad teams, the other the worst home loss in over 11 years) does to you, especially in the always-competitive Western Conference.

The news isn't good for our beloved Nuggets.

First off, the Nuggets have announced that Nene will be out for two weeks with a bone bruise in his knee, keeping the Nuggets power forward curse alive and well. Secondly, the Utah Jazz are fully healthy for the first time all season after being able to weather the worst rash of injuries in the NBA and remain just three games behind Denver. Third, the Nuggets "healthy" players are playing erratically. J.R. Smith and Linas Kleiza have been consistently inconsistent, Chauncey Billups has been ineffective and too whiny with the refs, Carmelo Anthony is taking bad shots and skipping out on playing defense and Anthony Carter has been sloppy and irresponsible with the ball. The only Nugget I've enjoyed watching lately is Chris Andersen, whose effort remains tireless and much appreciated.

Lakers' head coach Phil Jackson has said that the key to a successful season is getting your 40th win before your 20th loss. Two weeks ago, I thought the Nuggets might do this. Now? If they could somehow win three out of their next four against the Hawks (tonight), the Lakers (Friday) and then at Indiana (Sunday) and at Detroit (Tuesday) they'd be a very respectable 40-21 and on track for a Nuggets NBA franchise-tying best 54 wins.

Is that being too optimistic?

Nene or no Nene, I say the Nuggets have to and can win three out of their next four, starting with a victory over the Hawks tonight (I'm assuming the Lakers game will be in the loss column). Like the Nuggets, the once-hot Hawks are struggling and are banged up, have lost two straight and could very well be without Mike Bibby due to injury and Josh Smith due to suspension. Tonight is a winnable game.

The Nuggets need to regain "respect for the regular season" as head coach George Karl so often preaches (but doesn't necessarily practice, but that's a column for another day). And a win against the Hawks tonight would be a step in the right direction of regaining that much needed - but suddenly lost - respect.