The road trip we need not fear continues...

Share All sharing options for: The road trip we need not fear continues... 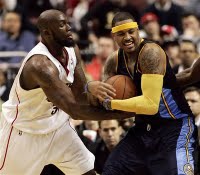 Remember before the All-Star break we discussed why the Nuggets have nothing to fear on this road trip? It's turning out to be even less worrisome than initially thought as the Nuggets. By beating the Sixers tonight - despite taking the entire first half to remember how to play basketball - the Nuggets are now 5-1 on this road venture with two to go and no back-to-backs (until, of course, the Nuggets face the Celtics in Denver on the second of back-to-backs).

The only downer about tonight was that the Hornets, Mavericks, Trailblazers and Lakers all won their games, too. That's right, my fellow Stiffs, I'm standings-watching already!

As mentioned by a few readers in the new Denver Stiffs Virtual Chat (I need another name for that thing - any suggestions?), the Nuggets have to do whatever it takes to secure the second seed in the Western Conference. Continuing to pound the NBA's lesser teams into submission as they did tonight will only help that cause. 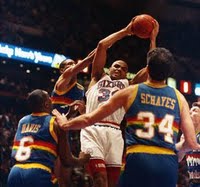 Before the All-Star break began last week, it looked like the Nuggets would be one of five teams in the Western Conference fighting for home court advantage in the post-season along with the Lakers, Spurs, Hornets and Rockets. Even before that point, the Trailblazers, Mavericks, Suns and Jazz had fallen back a bit due to an assortment of injuries and bad personnel decisions.

Going into tonight's game against the Sixers, the Nuggets no longer need to worry about the Hornets or Rockets, either.

The news just broke that the Rockets' Tracy McGrady is done for the season (I'm beside myself in shock) and will be undergoing microfracture surgery. And of course we were already aware of the Hornets trading center Tyson Chandler to the Thunder for Chris Wilcox and (former Nugget and former eight other teams) Joe Smith, essentially waving the white flag on their season.

By no means does this mean the Nuggets should be cocky or rest on the laurels of their regular season success thus far. Moreover, its usually the Nuggets themselves that are bitten by the injury bug during the season. But I certainly can't complain about the Nuggets toughest competition falling to pieces around them.

Entering tonight's contest in Philadelphia, the Nuggets have had seven days rest. Seven! I know the Sixers are playing above their means lately, but there's no excuse for the Nuggets not to beat them and continue distancing themselves from their injury-riddled Western Conference foes.

Denver Stiffs News: As you'll see on the right hand side of this blog, I've put up a Denver Stiffs Virtual Chat. This was the suggestion of loyal Denver Stiffs reader "goldennugget" who felt this blog would benefit from its readers being able to interact with each other (and me when I'm available) in real time. Several readers have also suggested a message board-type system being added, as well. Please know that I'm looking into this and am trying to find a system that works for us. Thanks as always for reading the blog and even though we have this new chat system, I hope you'll continue to comment on the posts.