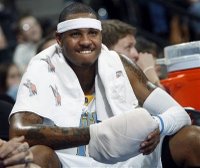 I was all set to write a fun, positive summary of tonight's 135-115 victory over the Indiana Pacers. Even though we're all thrilled with the Nuggets commitment to defense this season, you still can't beat an old-school, 80's shootout like what we witnessed tonight at Pepsi Center. Now that's what I call 80's Night! (On a side note, how could the Nuggets not don the rainbow uniforms on "80's Night" against the Hornets on Saturday? Moreover, they should only have "80's Nights" against 80's rivals, like the Jazz, Spurs or Mavericks and have both teams wear the retro jerseys. And yes, the Nuggets marketing department should hire me.)
But while glancing at the AP recap of the game, I immediately noticed they're reporting that Carmelo Anthony fractured his right hand. Damn. Damn, damn, damn, damn.
Before pushing the panic button, we'll have to wait and see what the Nuggets officially report on Melo's status. After all, will this be an Allen Iverson-type situation where he plays on with a broken bone in his hand? Or will it be much worse, a la Chris Andersen in 2002 when he fractured his hand smacking the glass after missing a blocked shot attempt and was out two months? I suppose the Nuggets have proven that they can (sort of) play effectively without Melo, but if he's out for more than a few games, he'll be sorely missed. You'll never catch me siding with the Melo bashers who believe the Nuggets are better off without him. I guess Linas Kleiza can now prove why the Nuggets should have re-upped him when they had the chance.
Since most of us in Nuggets Nation - including me - will be depressed over the potential for Melo to be out for a while, allow me to leave you with this video clip that should cheer you up momentarily. This goes well with the recent ranting about Nuggets announcer Chris Marlowe that popped up in the comments after Sunday's post. This video was sent in from loyal Denver Stiffs reader Matt W. in Los Angeles...

[UPDATED] The Rocky Mountain News' Chris Tomasson gives a detailed update on Carmelo Anthony's hand situation. According to Tomasson, the initial report is that X-rays showed Anthony "has a probable nondisplaced fracture on the third right metacarpal of his right hand" and we'll get more news tomorrow. George Karl - playing a doctor on TV - says "I think it's in the weeks area." Ugh.