Share All sharing options for: Never a dull night at Pepsi Center... 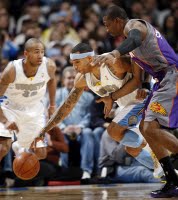 They take ill-advised three-pointers with way too much time left on the shot clock. Their rotations aren't consistent whatsoever. They continually piss away healthy third quarter leads. They turn the ball over inexplicably. 40 games into the season, I don't think they've run a single set play. Not one. And as far as I'm concerned, if Kenyon Martin never takes another long-range jump shot, it will be too soon (and no, I don't care about his record three-point shooting this season).

And yet - and go ahead, call me a sucker - I love watching this team, play. Absolutely love them.

At the conclusion of the Nuggets next game we'll have reached the halfway mark of the 2008-09 NBA Season, and I think I'm finally starting to realize who these Nuggets are: erratic, mind-numbing, exhilarating, escape artists and, dare I say, winners. These guys know how to win games, and that might be their most important attribute going into the second half of what's sure to be a grueling fight for home court in the postseason. And believe me, this Nuggets team desperately needs the home court advantage if they're going to win a playoff series (for once).

On a side note, the Suns resting Shaquille O'Neal tonight made no sense whatsoever. I (sort of) understand why the Suns are giving Shaq a break on the first or second of their back-to-backs all season. But wouldn't they rather play Shaq against a very good Nuggets team they might need a tiebreaker against than an awful Timberwolves team they face off against in Phoenix the next day? 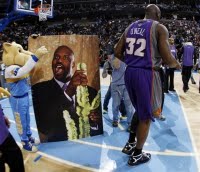 I'm sorry I didn't get a chance to recap the Nuggets/Mavericks game but I want to thank all the readers for picking up the slack and leaving such detailed comments afterward. For those of you who might be curious, my ACL surgery went as well as it could. Right now I'm laying comfortably on my couch with an ice machine pumping cool air on my knee and am very much looking forward to tonight's TNT doubleheader.

For the second game of the doubleheader, the Nuggets face off against an opponent similar to the Mavericks: the Phoenix Suns. Like the Mavericks, it seems like yesterday that the Suns were one of the most feared, deep, versatile teams in the Western Conference and yet today they're old, have no bench, no future and yet remain talented enough to cause trouble in the postseason for any opponent.

The Nuggets haven't lost to the Suns in Denver for two years and seem to play fairly confidently against them at Pepsi Center. Shaquille O'Neal in particular seems to get tired early at 5,280 feet. Remember how awful he played against the Nuggets last season while still a member of the Heat?

Earlier this season, the Nuggets played the Suns pretty well until the final moments of their December 20th matchup which the Nuggets eventually lost 108-101. If you remember, Carmelo Anthony shot a dreadful 3-13 that night and it was apparent that he was having elbow problems. So if you consider that the Nuggets almost beat the Suns in Phoenix with Melo shooting 3-13, we have every reason to be optimistic that they'll beat the Suns in Denver tonight, even without Melo.