I'm ready for Carmelo Anthony to come back now...

Share All sharing options for: I'm ready for Carmelo Anthony to come back now...

Maybe it was the Vicodin I'm taking for the pain in my knee, but I was so nauseous watching the Nuggets last night that I couldn't even look at my computer screen without feeling like I was going to throw up.

When Denver Stiffs dissected the upcoming Nuggets schedule sans Carmelo Anthony, I predicted that the Nuggets would lose three of their eight home games and that those losses would come to either Detroit, Orlando, Dallas, Phoenix or Utah. Let's hope I'm not right and the Nuggets will end up with just two such losses, stopping with last night's drubbing by Orlando.

With two days rest and the Magic coming off a tough game against the Lakers, I was hoping the Nuggets would steal this game against one of the NBA's best teams. But when J.R. Smith, Nene, Kenyon Martin and Chauncey Billups combine to shoot 15-of-55 (15-of-55?!) and you don't have Melo on the floor, you're not going to beat anybody. Even Linas Kleiza's fantastic effort couldn't keep the Nuggets in the game down the stretch.

The Nuggets trend of having good fortune in other ways continues, however, as both the Jazz and Trailblazers lost last night, too. 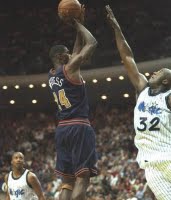 First off, I want to sincerely thank several NBA teams for their efforts last night. The 76ers beat the Spurs, the Cavaliers beat the Hornets, the Timberwolves beat the Suns (how's that resting Shaq strategy working out now?) and the Lakers wore out the Magic, the Nuggets opponent at Pepsi Center tonight.

The Magic are tearing the NBA apart right now. They've won six straight, eight out of their last 10 and have the NBA's second best record. In particular, Jameer Nelson - a former Nuggets draft pick who was traded unnecessarily on draft night - is playing the best basketball of his career.

The Pepsi Center seems to be the Magic's Achilles' heal, however, as they've lost five straight in Denver. Let's make it six straight tonight!