Nuggets/Jazz Recap: Could this be the best win of the season?...

Share All sharing options for: Nuggets/Jazz Recap: Could this be the best win of the season?...

I wouldn't go as far as saying tonight's win over the Utah Jazz was the Nuggets best win of the season (that would still be the Nuggets' 94-85 win at Boston on November 14th...the moment the Chauncey Billups' Nuggets served notice the NBA that they meant business). But tonight's victory may very well be the best played Nuggets game of the season.

The other day, a fellow blogger asked me a few questions about following the Nuggets. One of the questions was: "What are the three most important things I should know going in?" Of the three things I cited, I led with...

...no two Nuggets games are ever the same and yet they remarkably win about 65% of them - the rotations never make sense, the plays are rarely if ever repeated, the effort varies from quarter to quarter, etc. There is nothing consistent about the Nuggets...

For the first time all season against a really good team, the Nuggets effort, commitment to defense and unselfish play never seemed the waver (with the exception of a few moments in the second quarter when we saw 18-point lead dwindle into the seven-to-eight point range).

Granted, the Jazz are banged up and were coming off a tough game against the Cavaliers last night, but they still got double-doubles out of their (current) big three; Paul Millsap, Deron Williams and Mehmet Okur. And the Nuggets sent them packing to the members-only bars in Salt Lake City early. (On a side note, if you were watching the Altitude broadcast, how classic was it when Scott Hastings astutely noted: "If I told you that Paul Millsap, Deron Williams and Mehmet Okur all had double-doubles tonight, what would you say about the Nuggets chances in the game?" To which Chris Marlowe replied along the lines of: "They'd be winning for sure." And Hastings all but said: "You're retarded, right?")

And let's give Nene credit for tying Bobby Jones' all-time Nuggets record by shooting 12-for-12 from the field on his way to a career high 28 points. Although I must say that I'm surprised Nene's career high is just 28 points. I thought for sure by now he'd have cracked 30 on multiple occasions in his career.

We have a busy week ahead in Nuggets Nation with three games in four nights. Go Nuggets!! 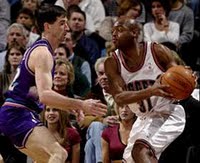 It's hard to believe, but the Nuggets haven't played since last Tuesday when they gave the Sacramento Kings a drubbing at Pepsi Center.

Tonight, the Utah Jazz - the NBA's cockroaches - come to Pepsi Center just 3.5 games behind the Nuggets in the standings, despite having lost 120 games to player injury so far this season. Do you think the Nuggets would be winning 56.8% of their games if their players lost 120 games due to injury? No chance.

Not that a victory tonight guarantees the Nuggets will finish ahead of Utah at season's end for the first time since the 2005-06 season, but being up 4.5 games over the Jazz in the standings would look pretty damn good considering the big road trip ahead for Denver.