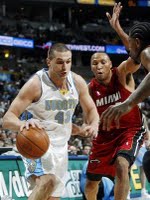 Just kidding.
I don't believe for a second that the Nuggets are better off without Carmelo Anthony. I do, however, believe that the Nuggets could be better off in the long run by not having Melo for this stretch of home games. And if I was building a case for my argument, tonight's win over the much improved Miami Heat would be Exhibit A.
I can't remember the last time three Nuggets scored at least 20 points in the same game (perhaps Melo, Allen Iverson and Linas Kleiza did it once and I'm sure Alex English, Kiki Vandeweghe and Dan Issel did it routinely), not to mention two other players putting up 14 points apiece. Now that's a balanced attack.
As this blog's astute readers have pointed out in the comments since Melo broke his hand, making up for Melo's scoring output won't be the Nuggets problem. And it was great watching LK and J.R. Smith fill it up throughout the game.
As with all wins against mediocre or sub-par teams, we probably shouldn't make too much of this victory over the Heat. But undoubtedly tonight's win will give the Nuggets the confidence they need to perform well without Melo for the next three to four weeks.
Oh, and wasn't it fitting that the first time I ever witnessed Yakhouba Diawara make an open three-pointer at Pepsi Center he's wearing the opposing team's uniform? That was classic.