If the Nuggets were a cat, they'd have about five lives left...

Share All sharing options for: If the Nuggets were a cat, they'd have about five lives left... 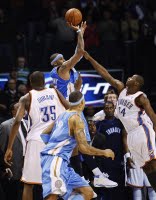 They say a cat has nine lives.
I'm starting to think the Nuggets do, too.
Since I'm still away, I was unable to watch the game. But my phone buzzed like crazy throughout dinner which meant that the Nuggets either lost or won in some remarkable fashion.
Thankfully - as I discovered when I was able to sneak a peak at the score on my phone from under the dinner table - it was the latter. I've since watched the highlights and am damn, damn sorry I missed this one!
Given that I didn't see the game, I won't get too much into why the Nuggets allowed possibly the worst team ever to beat them (although I did warn that this post-New Year's game at OKC would be a trap game in my schedule preview on October 24th and again earlier this week). But I can assume a few things based on how the Nuggets performed and yet still came out victorious against other dreadful squads like the 76ers, Grizzlies, Timberwolves and Knicks...
My guess is that after a decent first quarter they got behind by at least 10 points in the second quarter. They then probably limped into halftime down by nine, took control at some point in the second half, let the lead slip away, gathered themselves late in the fourth quarter (after George Karl finally called a timeout) and somehow eeked out a victory.
For those who watched it, am I right?
A game-winning three pointer is always exhilarating, and give Carmelo Anthony credit for being able to make (and take) such a big shot. Remember 2005-06 when he seemed to do that on a regular basis?
Maybe we'll be getting that clutch-shooting version of Melo back for the rest of this season. And frankly - and unfortunately - if the Nuggets are intent on keeping it close with the NBA's worst, we just might need him to do this more often. After all, how many lives do these Nuggets have left?