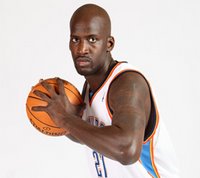 I don't remember where (maybe it was a commenter), but I read someplace that the Nuggets were looking to make a "Pau Gasol-type deal" by giving up an expiring salary and their first round draft pick for a big man. Well, my friends, Johan Petro is no Pau Gasol. And all I can think right now is...this is the big man we've been holding our breath for?
I guess the Nuggets couldn't pursuade OKC to give up Chris Wilcox for Chucky Atkins, Steven Hunter and their 2009 first round pick. Or the Knicks to do the same for David Lee. Now those would have been good trades. I'm just going to assume they at least tried.
I'm not going to make too big a fuss over what will be an inconsequential trade in the long run, and I understand the Nuggets desire to get under the NBA's luxury tax threshold. But readers of this blog know there are two things I really don't like: throwing away first round picks and seven-footers who don't shoot at least 50% from the field. Just look at the current state of the Phoenix Suns (or even deep into the Nuggets bench, for that matter) as an example of why you don't throw away first rounders.
Contrary to what many basketball pundits think, latter first round picks don't cost that much and smart teams can find a lot of value if they know how to draft. I'll stand by my statement from this past summer that giving away first round picks is lazy, not strategic (unless you're getting someone like Pau Gasol in the deal, which the Nuggets certainly aren't).
With that said, I wish Chucky all the best in OKC. Sincerely. I was really hard on Chucky last season and have never been a fan of his game (and I've still never seen him make a jump shot). But he was a class act during his entire tenure in Denver even though it must have been a very frustrating situation for him.
As for Mr. Petro, while we welcome you to Denver I'm praying even harder now that neither Kenyon Martin, Nene or Chris Andersen get hurt. No offense, but you're not exactly the insurance policy we were looking for.