Did Carmelo get screwed?...

Share All sharing options for: Did Carmelo get screwed?... 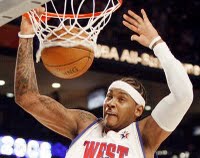 As I'm sure all Nuggets fans know by now, Amare Stoudemire beat out Carmelo Anthony in fan voting to be the second starting forward in February 15th's NBA All-Star Game, alongside the always deserving Tim Duncan. When I first heard this, I found it awfully convenient that Stoudemire got the start given that the game happens to be played in Phoenix this year. But according to the final voting results, Melo finished fifth in fan voting behind Duncan, Stoudemire, Bruce Bowen and Ron Artest.

Had Bowen actually made it - and he almost did! - this would have been the biggest All-Star voting travesty since All Christian (A.C.) Green was voted into the starting lineup in 1990. If memory serves, A.C. not only played the fewest minutes of all the All-Stars in the game, but he was also the only player who didn't score. A similar travesty occurred in 1994 when B.J. Armstrong and his 14.8 ppg ended up getting a starting nod.

And yes, I'm an NBA All-Star Game historian in my spare time.

We almost had two All-Star starter controversies this year, and I must admit I was rooting for the second one to actually happen. The Nets' Yi Jianlian (and his 10.5 ppg and 40% field goal shooting) came within 253,000 votes of unseating Kevin Garnett and being one of the Eastern Conference's two starting forwards. They may ban a lot of websites in China, but NBA.com clearly isn't one of them. I was hoping Yi would get the start because I wanted to see how the NBA would spin it to the press and how the players would react to him on the floor. I don't even think Yi qualifies for the rookies/sophomore game on Friday night, much less the main event on Sunday!

Getting back to Stoudemire versus Melo, while I'm disappointed as a Nuggets fan, it's not like Stoudemire isn't an All-Star (even though Melo is having a better all around season in my opinion and has to shoulder more of the load on his team than Stoudemire does, ever has and ever will have to). Moreover, its arguable that Dirk Nowitzki is having a better season than either Stoudemire or Melo, but he never comes close to being a starter in the annual voting.

The big question now, of course, is will Melo crack the squad as a reserve when the coaches get together and vote? For the first backup forward position, I think Dirk is a lock. For the second, it will be a tight vote between Melo, Pau Gasol, David West and possibly LaMarcus Aldridge. If Melo doesn't get hurt, he's a shoo-in, but that's not the reality of the situation. But fortunately for Melo's chances, Carlos Boozer is out of the running due to injury, Paul Millsap hasn't played enough minutes to qualify and Josh Howard is having another down year. So I like Melo's chances.

If it was up to me, these would be my reserves in each conference...

F-Dirk Nowitzki
F-Carmelo Anthony
C-Shaquille O'Neal (how can Shaq not be in the All-Star game in Phoenix?!)
G-Chauncey Billups
G-Brandon Roy
Wildcard #1-Tony Parker
Wildcard #2-Steve Nash (for the same reasons as why Shaq should be in the All-Star Game)
The "Andrew, how could you not include these guys on the team. You're an idiot!!" List: Pau Gasol, Al Jefferson and David West.

F-Paul Pierce
F-Chris Bosh
C-Do we really need a backup center in the East? Can't we just give this spot to a forward like Antawn Jamison or Caron Butler. Please?
G-Devin Harris
G-Joe Johnson
Wildcard #1-Danny Granger
Wildcard #2-Ray Allen
The "Andrew, how could you not include these guys on the team. You're an idiot!!" List: Either Jamison or Butler, Rashard Lewis and Hedo Turkoglu.