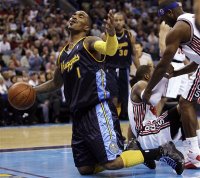 Even though I watched this entire game from start to finish, I still did a double take when I saw the final score. "Did the Nuggets really score just 81 points tonight?!" I thought to myself. After a little digging, the Nuggets haven't scored so few points since they managed a mere 80 points in a January 3rd, 2008 loss to the San Antonio Spurs.

While I never like seeing the Nuggets lose, it was almost fitting that they lost badly in what's supposedly their final game sans Carmelo Anthony who's been out since January 6th with a fractured right hand. The Nuggets will certainly be better off in the long run having finished this 10-game stretch sans Melo at a very respectable 6-4. But better without Carmelo Anthony they clearly are not. (For those scoring at home, Denver Stiffs predicted that the Nuggets would finish January 30-17 as a result of Melo's injury. Let's hope I'm wrong and they end up at 31-17 after beating the Robertcats on Friday night.)

Yes, J.R. Smith and Linas Kleiza are capable of Melo-type scoring outputs on any given night, but Melo does it virtually every night. And his relative consistency as one of the NBA's best scorers is an amazing talent unto itself, much like Alex English's was twenty years ago (god I feel old).

Looking back at this 10-game span, not only do I have more faith than ever in the Nuggets supporting cast, but I have a renewed appreciation for what Carmelo Anthony means to the Nuggets. On a night when the Nuggets put up a paltry 81 points and shot just 16 free throws against a wounded, thinned out Hornets team, I can assure you that Melo's 21.1 ppg and 6.7 was sorely missed.

Is it just me, or does it seem like the Nuggets are always playing the Hornets?

They first met on Thanksgiving night, a game in which Kenyon Martin's ill-timed technical foul for kicking the side of scorers table and George Karl's ill-timed decision to yank J.R. Smith with about a minute to go cost the Nuggets the game. The two teams then reunited in Denver just over three weeks ago, when the Nuggets blew a 26-point third quarter lead and somehow pulled out the victory (thanks largely to, guess who? J.R. Smith). And now they meet again tonight - for the first time in New Orleans - with second place in the Western Conference on the line.

Luckily for Denver, New Orleans will be without the services of Tyson Chandler and most likely David West, too. So even though the Nuggets exerted a good deal of energy besting the Grizzlies last night, they could certainly win their fourth game in a row tonight, teeing things up nicely for Carmelo Anthony's return on Friday.