Are the Grizzlies the worst team name in the NBA? (Nuggets/Grizzlies Preview)...

Share All sharing options for: Are the Grizzlies the worst team name in the NBA? (Nuggets/Grizzlies Preview)... 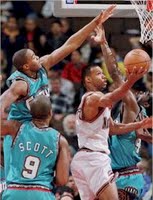 Most NBA pundits will tell you that the worst team names in the NBA are the Los Angeles Lakers (because the Los Angeles area has very few, if any, lakes) and the Utah Jazz (the Mormons may be known for their Tabernacle Choir, but certainly not their proficiency with the saxophone, trumpet, trombone or clarinet). Anyone who knows anything about the NBA knows that the Lakers were originally based in Minneapolis (hence the name "Lakers") and that the Jazz originated in New Orleans (hence the name "Jazz"). There have even been rumors in the past of a possible name swap between the two franchises.

Given their geographical locations, the Lakers and Jazz are certainly two of the worst named teams in professional sports. But given that Los Angeles and Utah decided to retain their original team names since 1959 and 1979, respectively, I give the Lakers and Jazz a pass.

I know its not a big deal in the grand scheme of things, but I can't shake it: why the @#$% is a team based in Memphis named the Grizzlies? Not only do grizzly bears only live Alaska, western Canada, Idaho, Montana, Washington, Wyoming and possibly even Colorado, they don't live anywhere near the state of Tennessee and never have. This offends me as both an NBA fan and a former attendee of the Denver Zoo Camp.

Even the Seattle Supersonics and their karmically rotten ownership group had the good sense to rename their team the "Thunder" upon moving to Oklahoma City. Otherwise, the Oklahoma City Supersonics would have shared the worst-team-name-in-the-NBA honor with the Grizzlies.

Maybe a third franchise move is in order to a metropolitan area that can actually support an NBA team like San Diego, St. Louis, or, dare I say, Las Vegas. But of course, grizzly bears aren't indigenous to any of those areas, either.