Why must we always play from behind?...

Share All sharing options for: Why must we always play from behind?... 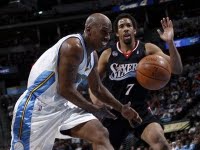 The Nuggets kept their streak alive of beating teams they're supposed to beat with their 105-101 victory over the 76ers tonight. And yet again, the Nuggets had to climb back from a big deficit to pull off the victory. In this most recent case, that deficit was 17 midway through the third quarter...to a team missing its all star power forward!
A win's a win. Especially with Carmelo Anthony being out. But at some point, the Nuggets will run out gas if they're playing catch up on a game-by-game basis.
Up next, the Nuggets have a matinee date with the Knicks on Sunday. If they can exhibit the same heart shown in tonight's later third and entire fourth quarter, beating the Knicks shouldn't be a problem.
Now if only that other Denver team could show us some heart on Sunday...