I haven't pushed the panic button yet, but it's nearby...

Share All sharing options for: I haven't pushed the panic button yet, but it's nearby... 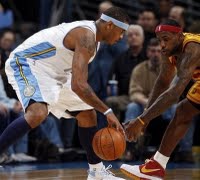 I think we can safely assume the Nuggets won't be seeing the Cavaliers again this season. While this Cavs team might make it to the NBA Finals, if the Nuggets keep playing like this against good teams, they don't have a @#$%& chance.

At 17-9 and still (barely) leading the Northwest Division, the Nuggets remain without an inexcusable loss to a bad team all season. What is alarming, however, is they are 5-8 against plus-.500 teams and have a number of inexcusably bad losses to some of those teams, including last night's drubbing by the Cavs at home.

What has perplexed me in both these two losses is head coach George Karl watching as the Nuggets to dig themselves into huge holes early, not calling timeouts to attempt to rectify the situation and not bringing in his "energy" guys - like J.R. Smith, Renaldo Balkman and Chris Andersen - earlier. (Balkman played less than four minutes last night after getting a DNP-CD in Houston and Dallas. What's up with that?!). This "I'll let them figure it out strategy" might work against Minnesota and Chicago, but it's clearly not working against these superior teams.

On the players' side, Carmelo Anthony's shot selection was totally irresponsible last night, and Nene and Kenyon Martin were completely ineffective. Last I checked, Zydrunas Ilgauskas wasn't exactly an intimidating inside presence and yet Melo, Nene and K-Mart combined for four free throw attempts. Four!! Including none for Melo. Inexcusable.

As of last weekend, all of us in Nuggets Nation knew that this week would be a big test for our Nuggets. And at 1-2 against good teams with two lobsided defeats to boot, the Nuggets are failing that test thus far. But just as we didn't get overly optimistic when the Nuggets seemingly could do no wrong, we don't need to get overly pessimistic quite yet and push the panic button (although we might do so on Wednesday if this trend of poor play against good teams continues).