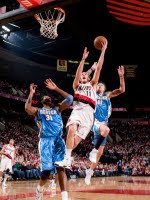 Make that 13-2 when the Nuggets attempt at least 29 free throws.

I don't have time to do a lengthy recap tonight, so here are my quick thoughts...

...the Nuggets did a lot of things right tonight. I liked their defensive intensity throughout, especially K-Mart's. I thought they were going to steal this game in the fourth quarter, but then they imploded towards the end.

...J.R. Smith did his best John Starks impersonation even though George Karl gave him ample chances to help the team out.

...Dahntay Jones is a total waste of a roster spot. He doesn't contribute on either end. His defense is totally overrated.

...It was good seeing Chucky Atkins get some PT even though I've still never seen him make a shot. Ever.

...AC didn't have an air ball but one of his three-point attempts barely touched the front of the rim and he had his mandatory per game huge turnover. Other than that, I thought AC played well. Give the guy credit tonight.

...Makes no sense why Renaldo Balkman is getting all these DNP-CDs. We desperately needed his energy. Again!

...Kudos to Linas Kleiza for almost single-handedly winning the game off the bench. It made no sense for Karl to sit him for that stretch of the fourth. Kleiza was the hottest hand going.