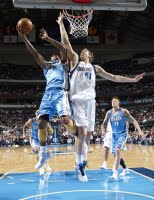 Read that again: the 2008-09 Nuggets are off to the best start in Nuggets (NBA) franchise history.

What made tonight's victory particularly interesting was the J.R. Smith vs. George Karl subplot adding another chapter. J.R. was red hot out of the gate in the fourth quarter as he guided the Nuggets back to a healthy lead (15 points I think) after they had all but relinquished it by the end of the third quarter. But then Good J.R. morphed into Bad J.R. and on three straight offensive possessions he took three awful shots, the Mavericks capitalized, and the lead shrunk to nine.

Wanting to stop the bleeding, Karl called his umpteenth timeout in the quarter (on a side note, isn't it great watching Karl actually use his timeouts this season!), presumably to take J.R. out for his recent bout of boneheaded shots. But when the team returned onto the floor after the timeout, J.R. was still among them. I was shocked. And even though he missed another shot or two, Good J.R. eventually resurfaced, rewarded Karl for putting his faith in him, made a few more shots, a few defensive stops and helped the Nuggets finish off the Mavericks for good.

Could this be the turning point in the season for the J.R. vs. Karl saga? Not quite yet. According to the Rocky Mountain News' Chris Tomasson, Karl's take on J.R.'s late game shot selection was...

"Can you talk to him about getting the bad out of his game? The crazy?’’ Karl said. "We go up and he plays great, and then he takes two (questionable) shots and I don’t know. Sometimes I think J.R. doesn’t think the other team thinks he’s doing good and they’re adjusting to him.’’

I'm not quite sure what the latter part of that quote means, but whatever Karl is doing seems to be working thus far. It's hard to argue with the franchise's best start in 32 years.