And now for some real competition...

Share All sharing options for: And now for some real competition... 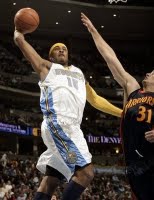 While watching the Nuggets pummel the Warriors last night, it dawned on me what might be the biggest difference between this Nuggets team and the Nuggets team from recent seasons past: these guys are beating the teams they're supposed to beat.

What made last season so infuriating was that in spite of winning 50 games, those who follow the Nuggets religiously knew that that team should have had 54 to 55 wins...easily. Last season's Nuggets squad lost home games to Indiana and Sacramento, and road games to the likes of Seattle, Chicago, Milwaukee, the Clippers and the @#$%& Knicks! And if you think I'm nuts to harp on a few bad losses, that was the difference between playing the Lakers in the first round vs. a team like the inexperienced Hornets, or the banged up Rockets and Spurs.

All the best teams in the NBA will drop a couple games a season to a far inferior opponent, as the Lakers did to the Kings and Pacers last week and the Celtics did to the Pacers earlier in the season. But what separates great regular season teams from good ones is their ability to keep those bad losses in check (say, three to four inexcusably bad losses at the most), something the Nuggets couldn't do last season.

As far as I can tell, the Nuggets haven't had one such loss this season. When the Nuggets lost to the Warriors in Oakland on November 5th, they had just parted ways with Allen Iverson, didn't yet have Chauncey Billups and the Warriors were fully healthy. So that loss won't count as one to a far inferior opponent.

But beyond beating who you're supposed to beat, the truly great regular season teams beat who they'd be forgiven for not beating. And the Nuggets have six straight games against such opponents coming up. Beginning tomorrow night, the Nuggets play at Dallas on Monday, at Houston on Tuesday, host Cleveland on Friday, play at Phoenix on Saturday and then have a Monday/Tuesday home-and-home against division rival Portland.

While we're all thrilled with the Nuggets play and record to date, they remain just two-and-a-half games up over Dallas and Phoenix in the Western Conference Standings. There's your reality check. Throw in a few losses, and the Nuggets could slip into the bottom half of the playoff seeding in a flash.

These are tough games ahead to be certain. But this Nuggets team is playing with confidence, defensive intensity and unselfishly. I believe they have the potential to be a great regular season team and a week from Tuesday, we'll have a much better idea of who these Nuggets are.