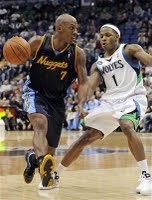 It was only a matter of time, but Chauncey Billups finally had his breakout game as the Nuggets easily dispatched of the Timberwolves tonight.

It was only a matter of time, but Chauncey Billups finally had his breakout game as the Nuggets easily dispatched of the Timberwolves tonight.

You never want to over think a win against the lowly T'Wolves, but its pretty remarkable that the Nuggets were 9-3 with Chauncey going into tonight's contest, and Billups hadn't even had a stellar individual performance yet. Does this mean even better things are to come?

Anyway, while losing for the umpteenth time in Scrabble I believe I saw a lineup with Billups, Anthony Carter, Chucky Atkins, Linas Kleiza and Kenyon Martin (or was it Nene?) on the floor at the same time. I guess if you're going to experiment with bizarre lineups combinations, the T'Wolves are the team to do it against.

And did J.R. Smith really get a mere seven minutes of playing time tonight. Seven? I'm trying to find out what J.R. did this time (other than score just 32 points off the bench on Thursday), or if he got hurt. But the Post's website just refreshes the homepage when you click on "Sports," so I'll have to investigate tomorrow through my other sources. (The Rocky doesn't cover the Nuggets for the Sunday paper because, well, there is no Rocky Sunday paper).

I hope you all had a great Thanksgiving weekend. Although its not quite over yet as the Rockets come to town tomorrow night. It will be interesting to see the Nuggets undersized front line go head-to-head with Yao Ming.