Looking into the costs of the Billups/McDyess trade...

Share All sharing options for: Looking into the costs of the Billups/McDyess trade... 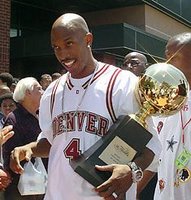 Now that the dust has settled from the shocking news that the Nuggets shipped future Hall of Famer Allen Iverson to Detroit for former Nuggets Chauncey Billups and Antonio McDyess...oh, and "center" Cheikh Samb (who?)...I thought we should break down what this is going to cost.

While most Denver Stiffs readers seem to be overhwhelmingly in favor of the trade, a few have commented or emailed saying that this trade makes no sense on the balance sheet. The argument being that the Nuggets were going nowhere with AI and will go nowhere with Billups, so why not just ride out the season with AI and get the cap space when his $22 million contract comes off the books?

I understand where these readers are coming from. But the problem with this argument is that even with AI's $22 million salary off the books, the Nuggets were still due to pay about $57 million in salary in 2008-09, approximately $1.7 million less than the NBA's cap for this season. In other words, even in a post-Iverson era, the Nuggets were in no position to attract a free agent point guard next summer. And given that the roster is already saddled with Kenyon Martin and Nene's ridiculous contracts, plus Carmelo Anthony's max contract, they actually did us fans a favor by putting together a team that on paper should be more than just competitive for this season and next.

I don't know if the Kroenke Cronies looked at the trade this way, but while you owe K-Mart a ghastly $46.1 million over the next three seasons anyway, you might as well make the team as good as possible. K-Mart may not be worth $46.1 million, but he's talented and physically gifted enough that on team already featuring Melo, Nene and J.R. Smith will keep the Nuggets within playoff contention. And I don't know about you, but I'd rather see a team that consistently makes the playoffs where anything (in theory) can happen than follow a team that consistently finishes with the 13th or 14th pick. Especially if that team commits to defense and has a deep bench.

Taking into account how cash-strapped the Nuggets will be down the road, I still like this trade. It maximizes the Nuggets potential to win this season and next, and if the team fails to go deep into the playoffs in 2009 or 2010, the Nuggets can rebuild around Melo, Nene and J.R. Smith in 2011 who will be only 27, 29 and 26 years old, respectively. And who's to say that either K-Mart and/or Billups' expiring contracts in 2010-2011 won't be attractive to someone?

Now if George Karl could just get these players integrated and playing well together, we might be in for a surprisingly successful season.

One can only hope.