Share All sharing options for: Karl to A.I.: "Don't let the door hit you on the way out"... 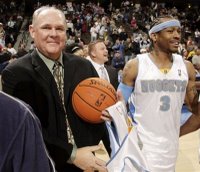 I was at a lunch meeting today and ESPN News was on the TV set in the back of the restaurant. Out of the corner of my eye I could see an icon of George Karl on the bottom ticker with what looked to be a quote dissing Allen Iverson's performance during his time in Denver. Not wanting to be rude, I didn't get up to look closer at what ESPN was reporting. So as soon as I got back to my computer, I scoured the web for something, anything, on these quotes and came up empty.

Until now. And it was right in front of my face.

Looking at the Denver Post Nuggets content from yesterday, I stumbled upon this article written by Benjamin Hochman which serves up Karl's recent quotes comparing A.I. to the newly acquired Chauncey Billups. I'm stunned that this hasn't been more widely reported.

"There are less bad plays, more solid plays. I think the wasteful, cheap possessions that we used to have 10 to 15 a game, they don't exist very much anymore."

"We have contested-shot charts, bad-shot charts and cheap defensive possessions. I would say that when A.I. was here, we had most games in the teens of contested, tough shots, sometimes in the 20s. And I don't think we've had a double-digit one since (Billups has) been here."

"I don't think there's any question coaching a team for many minutes, without a passing and point guard mentality, is frustrating for a coach. Sometimes I saw something, but I couldn't get it done on the court because I didn't have a playmaker out there."

Wow. It's as if Karl is trying to out-gaffe Joe Biden.

As usual, Karl lays blame on his team's failure to win more than one playoff game in two seasons with a roster chock full of top draft picks and All-Star caliber players on anyone other than Karl. Karl's players are by no means blameless, but when Karl shares the blame with his players, it will be for the first time.

Furthermore, I don't seem to recall A.I. taking a night off last season while his "coach" regularly did so. There's a reason why Karl finished second-to-last in coaching technicals last season with one.

And even if what Karl said about A.I. is true, what good does it do to say it? What's the point? Why not just take the high road (as A.I. has done since leaving Denver), wish A.I. the best, and move on? Why ruin what's been a great two weeks of the Chauncey Era?

The Nuggets/Pistons January 9th matchup just got infinitely more interesting. I'll be rooting for the Nuggets to win and for A.I. to torch his former "coach" for 50+ points.