Could our Nuggets be the NBA's version of "Major League"?...

Share All sharing options for: Could our Nuggets be the NBA's version of "Major League"?... 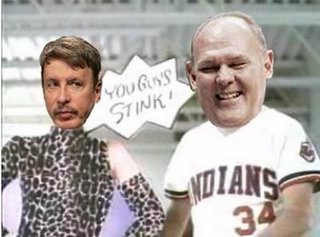 After watching the Nuggets beat the Not-Your-Father's-Spurs in San Antonio tonight, I was trying to think of the last time a professional sports team had been gutted by management, dissed by the national media and yet proved the naysayers wrong. Nothing immediately came to mind other than the 1989 hit baseball movie "Major League."

Admittedly, this comparison is quite a stretch, but it's fun to consider nonetheless (this is what happens when yours truly turns in his post-game blog column north of midnight).

Like Indians owner Rachel Phelps in "Major League," Nuggets owner Stanley Kroenke was clearly fed up with the direction of his team and seems intent on cost-cutting wherever possible. His credo to save, slash and burn salary led to his cronies in upper management giving away Marcus Camby for nothing, not re-signing Eduardo Najera, skipping the 2008 NBA Draft, not bothering to fill out a 15-man roster and signing a collection of NBA also-rans for the absolute minimum. I didn't even know you could make less than a million dollars in the NBA until I looked at the Nuggets payroll and saw three players in the sub-million range, in addition to two more players barely making more than a million.

What's next? Cold water only in the hot tub to save money on heating expenses?

Also seen in the early parts of "Major League" was a group of professional athletes who partied together off the field while their on-field chemistry was god awful. That Indians "team" also featured a longtime manager who had become so disillusioned with his team that he barely put forth any effort while daring ownership to fire him. And then a former player beloved by the fans returns to the organization after being discarded by every other team in the league, and the team begins to turn the corner.

For the 2008-09 Nuggets, I see Chauncey Billups in the role of Tom Berenger's Jake Taylor: the grizzled veteran who shows his young, selfish teammates how the game is really played. Carmelo Anthony is akin to Corbin Bernsen's Roger Dorn: he used to only look out for himself, but thanks to Taylor's leadership, he becomes a selfless teammate. Nene? Dennis Haysbert's Pedro Cerrano obviously. J.R. Smith is the Nuggets equivalent of Charlie Sheen's Ricky "Wild Thing" Vaughn: the erratic youngster who - as ESPN's Jeff Van Gundy acutely stated during the Boston broadcast - "makes both coaches nervous." And of course, George Karl could take on the role of James Gammon's Lou Brown: the old school bench coach who's playing with the house's money and therefore gives his team one more energetic managing effort.

Throw in the national NBA media leaving this team for dead before training camp even started, and we have the making for a possible Cinderella season. Not one reputable NBA writer (other than this blogger, naturally) picked the Nuggets to make the playoffs. Not one. In fact, most NBA pundits had our Nuggets winning about 37 games at season's end...13 off of last season's win total.

It's still very early into this new season to make any bold proclamations about where the season will end up. But if (and it's a big if) the Nuggets can stay healthy, there's no reason to think that their "us against the world" mentality won't continue to produce gutty wins like we witnessed in San Antonio tonight.

I can't remember the last time I was this excited to be a Nuggets fan.