This is a good trade for both teams...

Share All sharing options for: This is a good trade for both teams... 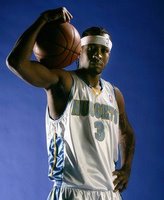 For those of you who think this trade came out of the blue, read the Denver Stiffs August 11th article on trading Allen Iverson. At that time, I suggested an AI-for-Chauncey Billups-and-Antonio McDyess-trade and gave it a 5% chance of happening. And now today, according to ESPN's Stephen A. Smith, the deal is almost done.

If only I could predict stocks this well!

If true - and as much as I hate to see AI leave Denver - this is a good trade for both teams.

Even though the Allen Iverson/Carmelo Anthony experiment sort of worked, it's become clear to most of us that they weren't going to win a championship together. Especially not this season. And by bringing in Billups and McDyess, the Nuggets now become a more traditionally constructed basketball team.

In fact, if George Karl knows what he's doing (which remains to be seen), he has a chance to replicate the success of the recent era of the Pistons by starting Billups and J.R. Smith together a la Billups and Rip Hamilton, with Nene and Kenyon Martin taking on the Ben Wallace/Rasheed Wallace undersized but effective front court and Melo playing the Tayshaun Prince small forward position. Of course, this requires preaching defense which will be a tall order over the entire season.

Adding Billups enables the Nuggets to spread the floor and gives them a better defensive presence in the backcourt. Moreover, Billups will be a good setup guy for Melo and give Melo a reliable outside shooting option when those double teams come. And defensively, after seeing Kobe Bryant torch the short Nuggets guards on Saturday night, I think we all agree that the Nuggets needed more size and defensive toughness at the guard spot.

As far as adding McDyess goes, ESPN's Ric Bucher is reporting that - even though McDyess likes Denver - he may want to retire before making another move in his career and this is why the deal isn't done yet. Huh? Assuming the deal gets worked out and McDyess comes to Denver for his third stint with the Nuggets, he's a great insurance policy for the oft-injured Nene and K-Mart (although McDyess is practically guaranteed to get injured again once he's in a Nuggets uniform per the Nuggets power forward curse...I'm just saying).

With Billups and McDyess back in town, I see the Nuggets hanging on to their 8th seed (at least) in the playoff race and remaining competitive among the NBA's best teams, but still don't see a championship coming our way with this squad. Billups is on the wrong side of 30 and McDyess is just a backup now. Even worse, Billups is on the books for two more seasons beyond this one meaning that if this new incarnation of the Nuggets doesn't work out, we won't have the cap space flexibility to right the ship. In other words, we're casting our lot in with K-Mart and Chauncey for the next three seasons. However, if Billups can somehow return to the "Mr. Big Shot" version of himself from two seasons ago, the Nuggets could be pretty dangerous in the half court game.

For AI and the Pistons, this is deal works out well for them, too. Detroit was going nowhere as presently constructed and in the Eastern Conference, AI is much closer to returning to the NBA Finals than he was with the Nuggets out West. Also, in Detroit AI can go back to being the primary scorer, a role he's more comfortable with, even though he did a good job in my opinion of deferring to Melo in Denver.

So it looks like the brief AI era has come to an end in Denver. As a Nugget, AI played his heart out. He kept the team afloat after the Melo and J.R. suspensions in 2006 and seemed willing and able to fit in with his teammates and let the game come to him. For those of us fortunate enough to watch him play regularly in person, its remarkable how good he really is. For whatever reason, television just doesn't capture AI's effort, talent and quickness. Also, let the record state that bringing AI into Denver in the first place was worth the gamble. The Nuggets had perhaps their deepest and most talented roster in franchise history last season but just couldn't get it done (hence www.firegeorgekarl.com's creation) and its time to move on.

AI will be missed. Sorely missed. But this is a good trade for both teams.