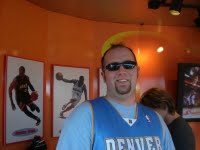 Denver Stiffs reader Chris C. wrote in with a thoroughly detailed account of what it was like to be at Indian Wells on Saturday night. He also sent me a bunch of pictures, and I've included a few of them that seem to capture what the night was all about. Many thanks, Chris! I really appreciate this...

Got back from California with pictures and thoughts. The pictures are attached as a zip file. There are a lot, use whatever you want. After the opening tip I didn't take any pics, as I was just watching the game.

As for thoughts, here goes: I'll stay away from the Nuggets "breakdown" as I assume everybody watched the game and will form their own opinions. I will say this: Balkman may be good for us, it was nice to see Birdman back, and it was weak that neither Melo nor AI played. It was cool to see Shaq and Nash live and in person though. Oh yeah, no Amare was weak too, although I got to watch him work out before the game. 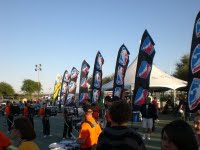 ANYWAYS, overall this event was a lot of fun. Starting at 3 PM they opened the site and had Playstations going with NBA video games, hoops where people could play, and other stuff like that. The venue itself was great. I had 4th row tickets in the corner (by the Suns' bench) and it was great. The food at the venue sucked, but I guess a tennis crowd is different from a crowd that might show up to Pepsi Center or Invesco. Very limited food options.

Oh, while the outdoor stuff was cool, it was more kid-oriented. If I had shown up at 3, I would have been very bored. As it was, I got there around 5 and was done with the outside stuff within about 30 minutes. I guess I don't know much about geography, because it never occurred to me that Indian Wells was only 250 miles from Phoenix. As such, my girlfriend and I were 2 of probably 25 Nuggets fans in attendance. I mean, I knew that it would be a longer trek for Nuggets fans, but I didn't realize that it's barely a 3.5-hour drive for Suns fans. It was still a lot of fun. Everything was done by the Suns. They had their merchandise people, their cheerleaders, their promotional stuff (ads on the screens, throwing out shirts, etc). I guess I just didn't know what to expect. I mean, I knew the Suns were the "home" team, but I thought that just meant they'd be wearing their home jerseys. I didn't realize it would be a full-on Suns production. Also, they were selling a pretty cool shirt for the event itself, with Suns and Nuggets logos. I'm a mark for that type of thing, so I picked one up. 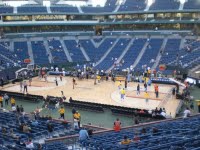 This type of event has a lot of potential for the NBA, I think. They'll work out the bugs, refine the process, etc. I really think they could (and should) do this every year. There were a couple problems, but overall it's a great idea with a lot of potential. One problem was that it was pretty cold at the venue. I don't know if it was bad luck or if it was typical for the area, but when the sun went down, the temperature really dipped down. At first I thought that it was just a rookie mistake that I didn't dress appropriately. I had on jeans, a t-shirt, and a nuggets jersey. But even the people who had on sweatshirts, light jackets, etc, were shivering, so that kind of dampened it a tad. I also wonder if running, warming up, getting moving, and then cooling down (really cooling down) is bad for the players' bodies. I know these guys are world-class athletes, but still.

Also, this event needs to be over opening weekend. It just has to be. I could have dealt with being cold, but I could not deal with being bored and cold. I mean, I knew it was a preseason game when I made the trip. And to be honest, the trip was just as much for my girlfriend and I to sneak away to sunny California for a weekend (during the day the weather was great) to forget school, work, etc, as it was to see the Nuggets. But still. When you're cold, you just don't want to sit through a preseason game. 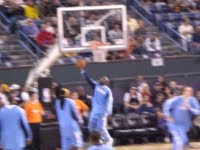 We ended up bailing on the game with 9:30 left in the 4th quarter. I mean, I've been to Bronco preseason games and sat through the entire game because the weather was nice and I could kick back with a beer and watch 4th string guys play. This needs to be moved farther south perhaps, maybe in Phoenix itself or Florida or something. Again, maybe it was an aberration and just bad luck on the weather front. Not really sure. Another alternative would be to make it earlier in the day. Now with that there will probably be television issues, but it's a thought. My only other real gripe is that there was no Melo or AI. I haven't followed preseason too closely, I heard Melo was actually hurt. Not sure where AI was. I don't know what kind of power David Stern has over individual franchises, but he needs to mandate that the stars play. Which kind of goes back to my thoughts that this should be a real game. But anyways, it was a lot of fun. 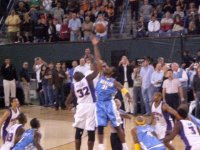 The area is really nice, there's a couple casinos close by (I was looking to see if Barkley was dropping any money and 'forgetting' to pay the bill, he was not) that were fun, there was great shopping, and the venue was really cool. If they do this again, I would definitely tell people to check it out if they have the time and money. Again, it's a nice weekend partly for basketball, but also partly to just get away, either with a significant other or your boys. I could have definitely taken a couple friends and my golf clubs and been very happy. Anyways, that's it. Too bad you missed it!