Could Juwan Howard be the Nuggets' P.J. Brown?...

Share All sharing options for: Could Juwan Howard be the Nuggets' P.J. Brown?... 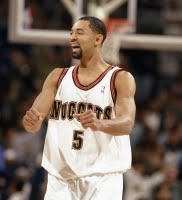 When we inducted the first class into the Denver Stiffs Hall of Fame in September, Juwan Howard received the most write-in votes of any forward. I found this perplexing, because while Howard was grossly overpaid in his NBA heyday, it wasn't the Nuggets (surprisingly) who gave him that contract. That was Wes Unseld's stupidity matching Pat Riley's stupidity.

Moreover, Howard was on the wrong end of that massive trade that sent Raef LaFrentz, Nick Van Exel, Tariq Abdul-Wahad and Avery Johnson to Dallas. Meaning, Howard (along with Tim Hardaway) went from playing for a championship to playing for a lottery pick. And while Hardaway exhibited visible frustration by bashing a courtside TV set and getting himself suspended, Howard kept his mouth shut, seemingly played hard in every game and came back the next season to appear in 77 games on a 17-win team, where he also mentored the young players during a tough season of rebuilding. Of course, I would do the same thing if I was getting paid $20 million (as Howard was paid in his final season in Denver).

Anyway, several Denver Stiffs readers have written in or commented about Howard being back in Nuggets camp on a nonguaranteed contract, as if this is some sort of catastrophe. But his money ("only" $5 million this season) will be coming from Minnesota, not Denver.

Unless I'm remembering things incorrectly, I thought Howard was a class act during his brief tenure in Denver. Additionally, coming into training camp the Nuggets were painfully thin at backup power forward, where two injury prone players (Nene and Kenyon Martin) will be asked to play a gross majority of the minutes, and we have no clue what we'll get from the Birdman this season.

If Juwan Howard does nothing more than provide veteran leadership from the bench and a few key minutes / clutch moments when called upon - a la P.J. Brown in the NBA Finals last season - wouldn't this be a good thing for the Nuggets?