[UPDATED] Did the Nuggets just improve their arrest-per-player ratio?...

Share All sharing options for: [UPDATED] Did the Nuggets just improve their arrest-per-player ratio?... 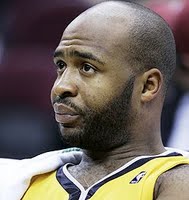 According to the New York Post's Peter Vecsey, the Denver Nuggets have shipped out Steven Hunter and the oft-injured Chucky Atkins to the Indiana Pacers for the oft-injured, oft-troubled Jamaal Tinsley. As of this posting, I'm not seeing anything on either of the Denver newspaper sites, and the Indianapolis Star is reporting that the trade has not happened. But NBA.com and ESPN are running with the news.

Before getting too worked up about this possible trade, keep in mind that Vecsey is wrong half the time and GMs feed him false information knowing he'll publish it (I learned this when I interned at Turner Sports, so I'm not making that up).

We do, however, know that the Pacers are desperate to shed the remainder of Tinsley's contract (he will make $7.5 million in 2010/11) and the Nuggets could certainly use a pass-first point guard...and, of course, another player with a long resume of run-ins with the law.

I'll have to do some research later, but with Tinsley on board, I believe the Nuggets would average the most arrests-per-player in the league.

I'm all for securing a pure point guard who's over six feet tall. But Tinsley is an undisciplined, lazy, overweight troublemaker whose 39.5 career shooting percentage almost makes Atkins look like a marksman. In other words, he'd be perfect for the Nuggets in the Mark Warkentien Era. Just perfect.

And when he's 33 years old, the Nuggets would be paying Tinsley $7.5 million while shelling out $16.5 to Kenyon Martin. If this deal goes down, you can kiss that future cap flexibility goodbye.

[UPDATED] The Rocky Mountain News' Chris Tomasson is reporting that the Nuggets have shot down this trade and Wark is calling the rumored deal "erroneous." Not surprisingly, it looks like Vecsey has been duped again.