Will he be like Alex English or Adrian Dantley?... 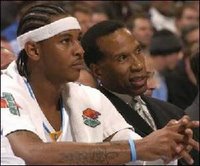 There are a lot of factors that go into a sports team making the playoffs: talent, coaching, character, leadership, gamesmanship, injuries, bench depth and so on. That being said, basketball - because its played five on five both ways - is one of the rare sports where having one great player can virtually guarantee you a playoff spot, especially when 53% of the teams in the league get a postseason slot.

For example, in his ten full seasons in Denver beginning with the 1980-81 campaign, Alex English's Nuggets teams missed the playoffs just once. Similarly, Clyde Drexler's Portland and Houston teams never missed a postseason, Dominique Wilkins' Atlanta Hawks made the playoffs eight times in 10 seasons (excluding a third postseason miss in 1992 when Nique only played half the season before succumbing to an Achilles tendon injury) and Charles Barkley participated in the playoffs in 13 of his 15 relatively healthy NBA seasons.

Conversely, in his 12 healthiest NBA seasons in which he averaged about 25 ppg on over 54% field goal shooting, Adrian Dantley's teams missed the playoffs five times. (AD also played on six different teams in that span). And Bernard King, while being mostly injury free in 10 of his 14 NBA seasons, mustered only four playoff appearances, excluding his 1993 playoff appearance with the Nets in which King played just eight minutes per game.

So what's the point?

The point is that the players listed above are the ones most often compared to the Nuggets' Carmelo Anthony who, like his predecessors from the 1980s and early 1990s, is a score-first phenom and the team's de facto leader. To Melo's credit, he has led the Nuggets into the highly competitive Western Conference playoffs in each of his five seasons in Denver thus far (something neither LeBron James nor Dwyane Wade have done in the Junior Varsity Eastern Conference).

But with the Nuggets entering 2008-09 with arguably the least talented team surrounding Melo since his arrival in Denver, I'm anxious to see if he's like Alex English - who routinely led the Nuggets into the postseason regardless of the talent around him - or more like Adrian Dantley, who in spite of averaging about 30 ppg in his seven seasons in Utah, guided the Jazz to the playoffs just three times (playing in two). Although unlike Melo, AD actually won a series in both of his playoff appearances for Utah.

This exercise is not to overly prop up English or overly denigrate Dantley, both of whom are deserving Hall of Famers. Moreover, two of English's playoff squads (1983-84 and 1986-87) weren't even close to being .500 teams and benefited from the Western Conference having only 12 teams.

But I think most basketball pundits would agree that English (who succeeded AD in Indiana early in his career and in Dallas at the end of his career) was typically regarded as a better teammate than Dantley, and the collection of talent around each of them throughout their careers was pretty even.

One player cannot do it alone nor be expected to. Even Larry Bird and Magic Johnson needed multiple Hall of Fame teammates to win their championships. But one great player can guide you into the playoffs regardless of the quality of his conference and the talent of his teammates. Is Carmelo Anthony one of those great players? I suppose we'll see if his playoff resume ends up looking like English's or Dantley's.