Why the Josh Howard implosion is great for the Nuggets...

Share All sharing options for: Why the Josh Howard implosion is great for the Nuggets... 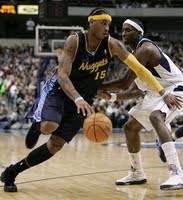 From about 2005 to 2007 Josh Howard could do no wrong. He was mentioned regularly in those "best small forwards in the Western Conference" conversations, helped lead the Mavericks into the NBA Finals in 2006 and to a 67-win season after that, and was even added to the All-Star Game, handpicked by Commissioner David Stern.

But Howard has displayed some bizarre behavior over the past year, culminating with his pulling a Mahmoud Abdul-Rauf and dissing of the national anthem (all while wearing a "Melo" Ravens jersey that looks like something you'd buy in East LA). Adding the national anthem debacle to Howard's admission of "occasionally" smoking pot and throwing himself a birthday party after a playoff loss while the series was still going on, and he's starting to Carmelo Anthony look smart.

Regardless of why Howard is undergoing a personal implosion, its great news for Nuggets fans. I think we can all agree that the top six Western Conference playoff teams from 2008 - the Lakers, Hornets, Spurs, Jazz, Rockets and Suns - will all be back in the postseason in 2009. This leaves the seventh and eighth seeds to be fought over by the Nuggets, Trailblazers, Clippers, Warriors and Howard's Mavericks.

A lot of Denver Stiffs readers have written in assuming the Mavericks will be appearing in their ninth consecutive postseason (quite a feat when you consider that that franchise missed 10 consecutive postseasons prior...I give Mavericks owner and my Palms Hotel pool mate Mark Cuban all the credit), but I'm not so sure. Jason Kidd's aging process appears to have accelerated. The depth that they've been known for in past seasons has evaporated. And what's worse, the Mavericks have gotten older and much more expensive (third highest payroll in the NBA), but certainly not any better. I feel bad for their new coach Rick Carlisle already. Well, not that bad. In other words, its looking like there will be a season long, five team battle for those last two playoff spots.

Speaking of Mark Cuban, I bumped into Cuban at the pool of the Las Vegas Palms Hotel and Casino in 2002, about a week or so after Kiki Vandeweghe had traded Raef LaFrentz, Nick Van Exel, Tariq Abdul-Wahad and Avery Johnson to Dallas for Juwan Howard, Tim Hardaway, Donnell Harvey and a late first round draft pick. Cuban was just hanging out in the pool all alone, so I swam over to him, introduced myself as a big Nuggets fan and asked him how he felt about Kiki trading half our team, essentially guaranteeing the Mavericks a division title for years to come, while the Nuggets were undergoing an extreme makeover for the fourth time in 10 years. (We may look back at Raef and Nick as Stiffs, but Raef was averaging 15 points, seven rebounds and three blocks per game, and Nick was putting up 21 points and eight assists per outing. In their season-and-a-half in Dallas, Raef and Nick contributed to teams that won 57 and 62 games).

Cuban - having been Kiki's employer in Dallas for a few years beforehand - told me that "Kiki knows exactly what he's doing, and you guys will be back in the playoffs in two years." Looking at a roster with an injured Antonio McDyess plus Juwan Howard, Voshon Lenad, George McCloud, Calbert Cheaney, Ryan Bowen and so on, I didn't believe Cuban at all. But his vision proved to be prophetic as the Nuggets were indeed back in the NBA Playoffs in 2004 and the future looked bright.

Four years later, the Nuggets future is much murkier. But I'd rather have the Nuggets roster right now than the Mavericks', something I haven't been able to say since the dawn of the millennium.