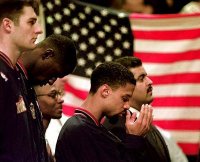 Before reading today's post I encourage all Denver Stiffs readers to check out this Robert Sanchez 2007 article from 5280 Magazine on Mahmoud Abdul-Rauf. It details Abdul-Rauf's time in Denver, his conversion to Islam, the national anthem controversy, his various community oriented ventures and what he's been up to lately. I made sure I re-read it this morning before writing on this sensitive but important topic.

In my Thursday column about the Mavericks' Josh Howard recent spate of bizarre behavior, I made a sarcastic comparison to Howard's stupid remarks on the national anthem to former Nuggets' guard Mahmoud Abdul-Rauf's refusal to stand up during it. Responding to this, loyal Denver Stiffs reader "rauf is on fire" wrote in saying:

Please don't compare Josh Howard's joking remarks to the thoughtful and deeply felt political dissent expressed by Mahmoud Abdul-Rauf. Far from just being my favorite Nugget, Mahmoud was one of the best human beings to ever step foot on an NBA court, and his protest against the flag has roots in a long tradition of African American political dissent, namely that embodied by Malcolm X.

While I don't pretend to know much about Josh Howard's personality or political leanings, the tone of his remarks do not show any sort of involved contemplation, whereas Mahmoud put in a great deal of thought into his statement, stemming from re-inventing himself personally and spiritually during his time as a Nugget. I don't discount the basis of what Josh Howard said, as his ambivalence toward the US is a major through-line of the black experience that connects slave narratives to hip-hop, but his refusal of American patriotism is not the same as Mahmoud's.

I completely agree with "rauf is on fire" that Howard's "stance" (if you can call it a stance) doesn't compare at all with Abdul-Rauf's. Abdul-Rauf's act was one of conviction, whether we agree with his conviction or not. So I shouldn't have been so flippant with the comparison.

Like "rauf is on fire," Mahmoud Abdul-Rauf is one of my favorite Nuggets of all time. In fact, if I had to put together my starting five of favorite Nuggets per position, I'd give Abdul-Rauf the edge at shooting guard (barely) over Allen Iverson - although not at point guard over Fat Lever. I'll never forget Abdul-Rauf's last shot as Chris Jackson when his buzzer beater gave the Nuggets a season-ending victory over the eventual Western Conference Champion Phoenix Suns and he leapt into coach Dan Issel's arms like a little kid being hugged by his dad. Or when he dropped 51 points against the Utah Jazz in Salt Lake City. Or when he sliced and diced past Michael Jordan on his way to 32 points as the Nuggets ended the 72-win Chicago Bulls 18 game winning streak. Even the Abdul-Rauf haters must admit that - along with Iverson and David Thompson - Abdul-Rauf , at just 5'10", was one of the most exciting Nuggets ever to watch play basketball.

To briefly recap the national anthem controversy, Abdul-Rauf refused to stand for the pre-game ritual for most of the 1995-96 season believing that it would be a sin for him to do so. At some point people noticed and the NBA/Nuggets demanded that Abdul-Rauf stand or be suspended, which he eventually was for one game. Abdul-Rauf reached a compromise by eventually standing for the anthem again, but putting his head in his hands while doing so. (And then those ignorant assholes from KBPI, in response to Abdul-Rauf's defiance, thought it would be clever to blast "The Star Spangled Banner" into the Islamic Center in Aurora, were charged with misdemeanor offenses and suspended, although they should have been fired).

The obvious irony, of course, is that because we live in the United States of America, people like Chris Jackson are free to convert to Islam (or any other religion for that matter) and can pretty much do whatever they want - short of injuring people - in the name of religious freedom, including refusing to stand for the national anthem. Moreover, let's not lose sight of the fact that no one was forcing Abdul-Rauf to play basketball. I know if my employer paid me $2.6 million to play basketball, I'd stand just about anywhere they asked me to.

As noted in Sanchez's article, converting to Islam was great for Abdul-Rauf. He went from the overweight, undisciplined Chris Jackson and morphed into the svelte, obsessively disciplined Mahmoud Abdul-Rauf. Unfortunately, on this journey Abdul-Rauf seems to have embraced some very perverted views on America, 9/11 and Jewish people, as exhibited by the remarks he made during his December 11, 2001 appearance on HBO's Real Sports. Even Hakeem Olajuwon said that Abdul-Rauf misstated the tenets of Islam at the time of the anthem controversy.

I don't know enough about the type of Islam that Abdul-Rauf practices to describe it as "radical" or "extreme," but I do know this about religion in general: whether someone is an ultra extremist Islamist, Jew or Christian, the majority of them seem to share the same distorted beliefs - oppression of women and gays, zero tolerance for dissent, a refusal to believe in evolution, sex for procreation only and outright bigotry - and often violence - towards those who do not share their beliefs. And its those extremists from all religious sects who mess things up for the rest of us moderates, secularists, agnostics and so forth.

Abdul-Rauf should be applauded for standing up for what he believes in, overcoming a very impoverished upbringing and Tourette Syndrome, making it in the NBA at just 5'10", and for not being seduced by the dark side of pro sports that engulfs many athletes, like what might be happening to Josh Howard right now.

But while Abdul-Rauf will forever be one of my all time favorite Nuggets, I just can't applaud those beliefs for which he was willing to get suspended and ultimately cost him his NBA career.

And luckily for both Abdul-Rauf and me, we live in a country where I don't have to.


On a side note, if you're curious where Abdul-Rauf is playing now, it appears as though he's joined the Al Ittihad Sports Club in Jeddah, Saudi Arabia. According to their website, one of Abdul-Rauf's teammates is none other than former Nugget Priest Lauderdale. Maybe its just a matter of time before Eric Washington, Darvin Ham, George Zidek, Eric Murdock and scores of other former late '90s Nuggets join the team.