Share All sharing options for: The Nuggets All-Intangibles Team...

When the Nuggets acquired Renaldo Balkman from the Knicks a few months ago (for the paltry sum of Bobby Jones and Taurean Green), Denver Stiffs reader "Micb" wrote in suggesting that we debate the Nuggets All-Intangibles Team - i.e. guys who may not have contributed much to the box score, but were integral to the team with their hustle, defense, attitude, work ethic, and so forth.

Here's my take on the Nuggets All-Intangibles Team...

Robert Pack was a key member of arguably the most exciting Nuggets team ever, the 1993-94 squad that became the first 8th seed to defeat a 1 seed in the NBA Playoffs by beating George Karl's Seattle Supersonics. Pack didn't really have any discernible skills other than lightning fast quickness and incredible jumping ability. Pack was so fast, that he often outran his own dribble on a fast break. But Pack had heart. A lot of it. In fact, Pack would prove to be the go-to guy in the playoffs that year and always seemed to come up with the big three-pointer, dunk, steal or charge.

Theodore Roosevelt Dunn (named after the former president, not the high school) was the consummate professional, a terrific defender and quite possibly the worst shooter ever to start at "shooting" guard in the NBA. He was Bruce Bowen before there was Bruce Bowen, sans the three-point shooting and dirty fouls. On any given night in the 1980s, Dunn would be asked to shut down Michael Jordan or Clyde Drexler or Magic Johnson or Rolando Blackman or Dale Ellis and so on. I remember hearing about a famous Jordan quote saying that Dunn was one of the toughest defenders he ever faced, but I couldn't dig it up on Google. Maybe that was just a rumor. Either way, the NBA noticed Dunn's exceptional defense as he was rewarded with placement on three straight All NBA Defensive Second Teams. 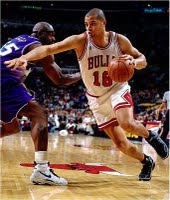 Like Pack, Brian Williams (known as "BW" as a Nugget) performed spectacularly in the 1994 playoff upset against Seattle and the near playoff upset against Utah in the following round. A third of all of BW's rebounds in the playoffs that year were offensive, and he provided much needed energy and toughness when starting center Dikembe Mutombo took a rest. Putting Williams' tragic death aside momentarily, if you've ever read anything about Williams - who later became Bison Dele - you'd know that he was one of the more colorful personalities ever to pass through the Nuggets and the NBA in general.

At just 6'7", 187 lbs and white, Hanzlik was the consummate Stiff according to head coach Doug Moe's definition of what a true Stiff is. But while Hanzlik might have come up short in size and skill, he well made up for in effort and attitude. Dennis Rodman might be the most famous player for diving onto the floor or into the stands for loose balls, but Hanzlik was doing the same thing way before Rodman hit the scene. Moreover, Hanzlik routinely guarded opposing team's centers, notably the 7'4" Ralph Sampson whom he pestered into bad shooting nights on many occasions. And who could forget Hanz's gutty "Player of the Game" performance against the Mavericks in Game 3 of the second round in the 1988 NBA Playoffs?

Power forward seems to be a cursed position in Nuggets Nation. The Nuggets have lost a number of talented, All-Star caliber power forwards to injury over the years such as Calvin Natt, LaPhonso Ellis, Antonio McDyess and now Kenyon Martin and Nene. And with the exception of Hammonds, the Nuggets have never had able backups at the four-spot. Hammonds was pretty limited offensively, but always played hard and played tough when given the minutes. It's too bad the Nuggets don't have a Hammonds-type player going into the 2008-09 season, since we all know K-Mart and Nene will be missing some games. (Elton Brown anyone? Anyone?)