Dave Krieger explains what a real Denver Stiff is...

Share All sharing options for: Dave Krieger explains what a real Denver Stiff is... 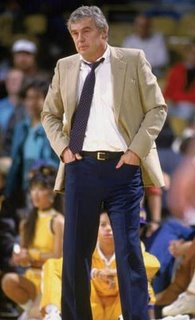 I'm back! I hope you all had a great two weeks and Labor Day weekend. While I was gone, Carmelo Anthony won his first gold medal (congrats, Melo!), the Nuggets wisely re-signed J.R. Smith and Barack Obama referred to Invesco Field as Mile High Stadium.

I have loads of e-mails to go through to tally up the votes for the inaugural class of the Denver Stiffs Hall of Fame, and I'm aiming to get that done tonight and then post the results - and the contest winner names - online. In the meantime, I'd like to share this terrific, detailed e-mail I received from none other than the Rocky Mountain News' Dave Krieger on what he believes is the true definition of what it means to be a Denver Nuggets "Stiff", from legendary coach Doug Moe's perspective. As anyone who grew up in Denver knows, Krieger covered the Nuggets during the Moe and post-Moe era before moving on to his current position as a columnist at the Rocky. This is a great read:

Thanks for adding me to your mailing list. As someone who spent 12 years of my working life following the Nuggets' every move, I, too, have a strange and inexplicable fascination with the machinations of this under appreciated example of serial failure in pro sports. I was also up close to some of that failure and developed an appreciation for how reasonable certain options can look contemporaneously and how awful retrospectively. I think historical analysis needs to do more than make fun of the outcome; it needs to figure out how perfectly reasonable people (for the most part) ended up making these disastrous decisions.

Anyway, yes, in your stiffs ballot you missed at least one legendary stiff of your own time, the immortal Joe Kopicki of the 1984-85 team that won 52 games and a division title and made it all the way to the Western Conference finals. Doug Moe may have called other players stiffs before Kopicki, but "that stiff" became his identity in his sole season as the Nuggets' 12th man. Fans would chant for him at the end of blowouts. They loved him. He appeared in 42 games for a total of 308 minutes, or about 7 per, almost all of them in garbage time. He did, however, make two of three from three.

Kopicki exemplified the concept of the stiff under Moe, and I think it's a little different from your definition. You seem to be looking for the biggest busts. High draft picks or big-ticket free agents that didn't work out. But a bust is not the same as a stiff; at least, it wasn't to Moe. It may be more useful for you on the site to make them essentially synonymous. That, of course, is your call.

But to Moe, a stiff was a guy with virtually no athletic ability compared to his average peer, the supremely gifted NBA baller. Yet the stiff made a career anyway, often a very short one, like Kopicki's, but sometimes a rather long one, like Danny Schayes'. Schayes couldn't jump three inches. But he was seven feet tall and by the sheer law of averages he would get his share of rebounds just standing there planted in the lane while athletes of freakish ability flew by all around him. "Big white stiff" is a term of art in the NBA and it does not refer to the Nikoloz Tskitishvilis, who have talent but never put it together. Tskitishvili can shoot much better than anyone Doug ever called a stiff. That didn't make him a player, but it made him more of a bust than a stiff. I think you need two different lists to m aintain the tradition of the stiff as Moe defined it, although that may just prove I've spent way too much time thinking about this stuff over the years.

Mark Alarie, for instance, was not a stiff. Maybe a bust, but not a stiff. He was just really soft. Tony Battie, too, may have been a bust but was far from a stiff athletically. Between his cockiness and thin build, he was never able to make the most of his ability. Kevin Brooks could shoot the lights out from long distance, but he never worked at his game.

Tim Kempton, Dean Garrett and Scott Hastings are all legitimate stiffs. You shouldn't feel bad calling Kempton a stiff just because he wasn't a bust. Stiff was a term of endearment, not a criticism. The first year the Heat was in the league, late '80s, a kid with a long beard comes up to me in the visiting locker room at the new Miami Arena and asked if I covered the Nuggets. I told him I did. He said he worked for the Miami Jewish News and wanted to know where Schayes ranked in the pantheon of NBA Jewish players of the day. I replied that I considered Schayes as good as any Jewish player in the association; in fact, I considered him the very best. The reporter was quite exited about this fortuitous turn in his story and rushed over to Schayes to get his reaction to this high praise. Schayes said he didn't know if he would go quite that far, but it was quite a compliment and he was very flattered. He was, so far as either of us knew, the only Jewish player in the NBA at the time. He was also a guy with a great, self-deprecating sense of humor. He enjoyed his role as a stiff and was happy to admit it.

Joe Wolf was a little too talented to be a stiff to start with, but he did grow into one as he lost his mobility. Bill Hanzlik was an absolute stiff, as Moe repeated many times. No single player was probably called a stiff more often by Moe. He couldn't handle, was a very average passer, couldn't shoot to save his life. He was just a tough, smart competitor, maybe the best stiff the Nuggets ever had. Ryan Bowen was a stiff in this mold. Great hustle player with no definable basketball skill. Blair Rassmussen started out too sweet a shooter to be a stiff, but, like Wolf, he sort of grew into the role.

Tariq Abdul-Wahad was not a stiff. He was a total bust for the Nuggets. He was a talented athlete with lots of issues, both physical and otherwise. Dale Ellis was far too good a shooter to ever be a stiff. You could dislike him for any number of reasons, but as someone who covered those teams, I'll say he was the most reliable pro out there most of the time. Always played hard, played huge minutes, and he was an old man by then. One of those years, I named him the team MVP. That wasn't saying much, but having a player who gave you 40 minutes of professional effort every night was a rarity on some of those teams.

George McCloud, like Ellis, was one of the best three-point shooters in the game for a while. Again, you can dislike his game, but he was not a stiff, at all, by the Moe definition.

Todd Lichti was far from a stiff. He was one of those rare white guys who could jump out of the gym -- a little like Rex Chapman in his early days. Todd could also shoot it a little. If it weren't for bad luck, he wouldn't have had any luck at all. Mo Martin was in this category, too. He just got hurt too seriously too early to really know what he might have been, but he did have talent.

Mark Macon was a total stiff. He was also a total bust. This is one of those rare cases of a player who belongs on both lists.

I've gone on long enough. I love the interest you've brought to following the Nuggets. The hits and comments to your site show you've found a great formula. It's wise-ass, but not so much that it's mean. I hope you'll keep that cheerful spirit about it. That's the spirit of the Nuggets stiff. It's not an insult. As Moe used it, it was often a backhanded compliment and almost always a term of affection.