[UPDATED] Rooting for a Melo vs. Kleiza matchup...

Share All sharing options for: [UPDATED] Rooting for a Melo vs. Kleiza matchup... 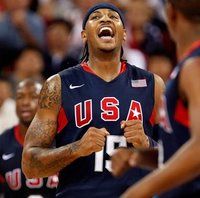 It looks as though Carmelo Anthony had his much needed breakout game in the Olympics as Team USA pummeled Spain, arguably the second most talented team in the tournament. With 16 points on 6-of-8 shooting (4-of-6 from three) and a sprightly defensive effort, Melo rediscovered his comfort zone with Team USA. So it looks like I was overly concerned after watching Melo's first few unimpressive outings in Beijing, and kudos to the Denver Stiffs readers who defended Melo right away.

It's time to put the Spain "slant-eyed" gesture controversy behind us, but I was glad to see them finally get their butts kicked. I was rooting for China to best them the other day and was disappointed when Spain pulled out the victory in overtime.

On the other side of the bracket, Linas Kleiza's Lithuania continued their undefeated march into the medal round, setting up a possible Melo vs. Kleiza matchup next weekend for the gold medal. Like his Denver teammate, Kleiza also made 4-of-6 three point shots as he put up 18 points in Lithuania's victory over Croatia.

Watching Kobe Bryant play against his Lakers teammate Pau Gasol was fun, but it won't compare to Melo going up against his fellow small forward Kleiza as they'd likely guard each other. So I'll be rooting for Lithuania...until they play Team USA, of course.