Maybe Melo has the wrong inspiration...

Share All sharing options for: Maybe Melo has the wrong inspiration... 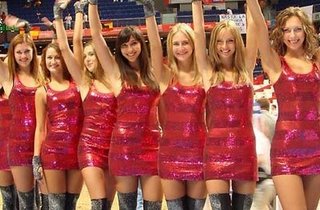 A lot has been made in the comments on this blog about how well the Nuggets' Linas Kleiza has been playing for Lithuania compared to how poorly Carmelo Anthony has played thus far for Team USA in the Olympics.

Lest we forget, Kleiza has really had only one good game (against Iran...hardly a basketball powerhouse) to go with the biggest shot of the Olympics so far in what was otherwise a sub-par performance for him. Meanwhile, Melo had a bad outing against China and - from what I could tell - a decent performance against a far inferior Angola squad. Therefore, Denver Stiffs will reserve final judgment until we're a few more games into the tournament.

But if Melo needs some incentive to boost his performance at the Olympics, perhaps he should look to the Lithuanian sidelines. Thanks to our friends at Deadspin (who referenced an interview with Craig Sager from the Washington Post blog...yeah, that's right, I'm giving you exclusive third hand information...how's that for off-season blogging?), I've become aware of the Red Foxes, Lithuania's traveling "dance team." Apparently these girls go everywhere the Lithuanian National Basketball Team goes and, from what I can tell, they're really, really hot. It's no wonder that the Lithuanians consistently outperform more talented teams!

I've never been a fan of the dancers, the god awful cheer team, the stupid "Mob Squad", the painfully annoying "Lil Bustas", the little kids introducing our players or any of that other nonsense we've been subjected to at Pepsi Center since Kiki Vandeweghe attempted to distract us from watching the 2002-03, 17-win Nuggets. It's as if the Nuggets have become so socially conscious that they have to have a cheerleader for every demographic: male, female, African-American, white, Asian, Latino, gay, straight, young, old, all of the above, and so on. I'm sorry, but there's absolutely nothing hot about the "Silver Hotties." And don't be surprised if the Nuggets copy the Mavericks and bring in a team of obese dancers for the 2008-09 campaign.

I'm one of those weird fans that actually likes to, you know, watch the @#$%& game! If the Nuggets are so obsessed with getting under the luxury tax, perhaps they should cut the 7+ forms of "entertainment" they torture us with every season. (Except Rocky, of course. If Rocky ever left, I'd probably have to root for a new team).

Maybe I'm just a sucker for those Baltic accents, but if the Nuggets "dancers" looked half as good as their Lithuanian counterparts I might be able to sit through another losing season.