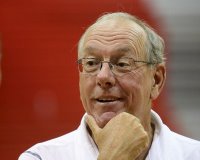 Team USA's assistant coach and Nuggets star Carmelo Anthony's former college coach had some candid things to say about the state of the Nuggets to the Rocky Mountain News' Dave Krieger. And kudos to Krieger for taking the time to talk to Boeheim, whom we haven't heard from much since the Olympics began.

I'll let you read the article yourselves, but the best quote from the Syracuse coach who presided over Anthony's NCAA Championship run has to be this reference to Nuggets owner Stanley Kroenke's recent cost cutting:

"From a financial viewpoint, I guess Wal-Mart's stock is down a little bit or something. Must be down a couple hundred million dollars, I don't know. I didn't know money was a problem in that family."

In a semi-related story, my DVR didn't properly record this morning's Team USA vs. Angola game, so I attempted to watch the game on NBCOlympics.com during my lunch break. Apparently, the NBC website rebroadcasts the entire game, but from the view of sitting in the stands basically. No Doug Collins, no Mike Breen, no (gasp!) Craig Sager, no commercial breaks, no replays, and so on. You have to sit through halftime, timeouts, national anthems, warm ups, etc. It's excruciating. Clearly NBC is doing this to entice us to watch their Olympic programming on TV, and not online.

You win NBC. I certainly won't misstep with my DVR recording again. How else am I going to see how many three-pointers the Americans miss against Greece on Thursday?