The hardest man to trade in the NBA?...

Share All sharing options for: The hardest man to trade in the NBA?...

Anyone who has followed this blog since it's inception knows that I'm a big Allen Iverson fan. I was all for the trade to bring him to Denver in December 2006, regardless of the 1-8 playoff record that has resulted since. In fact, I hadn't given up on last year's version of the Nuggets (I just thought we needed a better coach, a decent draft pick and one reasonable trade), but it's obvious that the Nuggets front office brass, at the behest of owner Stan Kroenke, have.

So with the Nuggets doing their darnedest to act like the cost-cutting Florida Marlins this summer - and with Mark Warkentien acting like Bobby Fischer circa 2008 versus the Fischer of 1972 - I think it would be best to trade Iverson for his sake, not ours.

As a Nuggets fan, I'd love to see Iverson lace up his sneakers at Pepsi Center for another season. But as an Iverson fan, I'm asking myself why he wants to play for a team being reconstructed for when he's no longer on it?

But while trading Iverson might sound good in theory (like Carmelo Anthony stating that his goal is to average 10 rebounds per game in the Olympics sounds good in theory), in practice Iverson might be the hardest player to trade in the NBA (excluding players like Kenyon Martin and Erick Dampier who are simply untradeable under any circumstance) for the following reasons:

1) Iverson has to go to a contender. No non-playoff team would want his $22 million salary nor would he want to play for one (well, other than Denver).

2) Iverson has to go to a team that would be willing to eat his hefty salary.

3) Whatever team acquires Iverson would have to send the Nuggets salaries in return equal to 75% of Iverson's $22 million contract. (Which I believe is correct according to Larry Coon's NBA Salary Cap FAQ - a handy site for NBA bloggers!).

So here's the real question: are the Nuggets so desperate to shed payroll that they'd trade Iverson for expiring contracts worth 75% of Iverson's deal, thus cutting another $5.5 million in salary but losing the revenue / confidence from the fans that Iverson brings (even though I've heard that the Nuggets ticket sales have only gone up 1% since Iverson's arrival)?

If you think the answer is "yes," then these are the only possible trades in my opinion, excluding three team deals that I'm not creative enough to come up with right now: 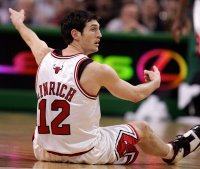 Iverson to Chicago for Kirk Hinrich, Tyrus Thomas, Thabo Sefolosha and Cedric Simmons
Why Chicago Would Do This: To part ways with Hinrich's four-year, $36.5 million contract, paving the way for rookie point guard Derrick Rose.
Why Denver Would Do This: Hinrich could be the pass-first, decent-shooting point guard the Nuggets have long needed.
Why Chicago Wouldn't Do This: Do the Bulls want to give up four players for Iverson in addition to risking impeding Rose's progress?
Why Denver Wouldn't Do This: At about $9 million per year, Hinrich's salary might be too rich for the Nuggets' blood.
Likelihood: 10% 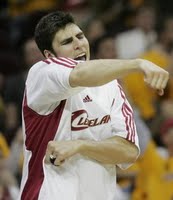 Iverson to Cleveland for Wally Szczerbiak and Damon Jones
Why Cleveland Would Do This: They're paying Szcerbiak and Jones a combined $17.4 million for one more season anyway (damn those guys have good agents!), so they might as well get Iverson for one year and go for a real NBA Finals push alongside LeBron James.
Why Denver Would This: To save $4.6 million in salary.
Why Cleveland Wouldn't Do This: I don't see a downside for the Cavs. If they could pair Iverson with James for one season, you're looking at a Finals contender in the East.
Why Denver Wouldn't Do This: The Nuggets would rather keep the few season ticket holders they have left than trade Iverson just to save $4.6 million.
Likelihood: 10% 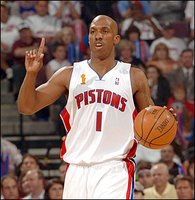 Iverson to Detroit for Chauncey Billups and Antonio McDyess
Why Detroit Would Do This: GM Joe Dumars is fed up with the Pistons inability to return to the NBA Finals and wants to capitalize on a still-weak Eastern Conference for one more Finals run. Also, Dumars might be so impressed with Rodney Stuckey that he'd be willing to part with Chauncey Billups and his three-year, $36 million contract (which was evident by Dumars' willingness to move Billups along with Tayshaun Prince for Anthony earlier this summer). Also, if Iverson panned out in Detroit, Dumars could re-sign him for less than what Billups would make.
Why Denver Would Do This: Beyond being a Denver native and a former Nugget, Billups would solve the Nuggets point guard, outside shooting and defense problems all at once (as stated in our Ex-Nuggets vs. Current Nuggets analysis back in June). It wouldn't hurt to bring McDyess back for one more go-around in Denver, too. Plus, the Nuggets would save $4 million in salary next season.
Why Detroit Wouldn't Do This: Dumars has never expressed any interest in Iverson. When he made inquiries to acquire Anthony from Denver for Billups, rumors were that the Nuggets countered with Iverson for Billups and Dumars turned them down.
Why Denver Wouldn't Do This: If the Nuggets are truly in a cost-cutting mode, they may not want to commit to Billups' salary, even though its fairly reasonable for a perennial All-Star and former NBA Finals MVP.
Likelihood: 5%

As you can see, it will be terribly difficult to trade Allen Iverson. Fortunately for us - but unfortunately for Iverson - we'll probably get to see "The Answer" play in Denver again next season.