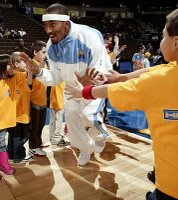 A lot of Denver Stiffs readers have been emailing me a link from Terry Pluto's Cleveland.com blog claiming that the Cavaliers are talking to the Nuggets about acquiring shooting guard J.R. Smith. According to Pluto, the Nuggets are so desperate to shed payroll, that they might be willing to relinquish Smith for an expiring contract or two.Giving up Smith in another salary dump would fly in the face of everything we've heard from Nuggets Vice President of Something or Other Mark Warkentien about Smith's free agent status to date. While Wark typically keeps his cards close to his man boobs, he's been pretty open about matching any offer for Smith that comes along.

Prior to the Camby "trade" debacle, I actually agreed with Wark's purported strategy as far as re-signing Smith is concerned. First, the Nuggets need to get over bidding against themselves for free agents (which in the past produced the ridiculous contracts for Nene, Kenyon Martin, Tariq Abdul-Wahad and others). Secondly, by publicly stating the Nuggets will match any offer tendered to Smith, perhaps Wark scared off potential suitors. Because until this Cavs rumor surfaced, we haven't heard a peep about interest in Smith from any other team.
As anxious as I am to see Smith re-signed, if I were Nuggets management I'd just wait and see what offers come in, match it, and hope its less than the mid-level exemption. Why pay more if you don't have to for a supremely talented - but sometimes troublesome - restricted free agent?

But if the Nuggets do indeed dump Smith to clear cap space, this would be yet another terrible decision by management. Moreover, sans Smith - and taking away Carmelo Anthony, Allen Iverson and Martin - the 2008-09 Nuggets would look a lot like the 2002-03 17-win Nuggets. Minus Jeff Bzdelik's work ethic, of course.