Your guide to the free agent market that the Nuggets can't participate in because we have no money left...

Share All sharing options for: Your guide to the free agent market that the Nuggets can't participate in because we have no money left...

The 2008 NBA free agent market kicked off at midnight with some notable names opting out of their contracts. Even under normal circumstances (i.e. not completely cap-strapped like the Denver Nuggets find themselves), a playoff team like the Nuggets wouldn't have a shot at big time free agents like Baron Davis, Elton Brand or Gilbert Arenas. But what's most unfortunate about the Nuggets' financial situation is that they likely cannot pursue "mid-level" free agents to improve the team for 2008-09. We'll be lucky just to keep our own coveted restricted free agent, J.R. Smith.

But if - again, IF - the Nuggets could actually spend some money this summer, here's a short list of unrestricted free agents that would improve our chances of winning a playoff series for once under George Karl. Please note that this list assumes the player is open to leaving his prior team (unlike Beno Udrih, who already re-signed with Sacramento) and he's not a max contract-type guy (such as Davis, Brand or Arenas).

So dream with me (or at least humor me) for a moment, and consider the following reasonably priced unrestricted free agent possibilities for the Nuggets to consider signing this summer. Basically, I want to see the Nuggets sign a decent sized backup guard who can hit three's, defend against the opposing team's tallest guard and provide some veteran leadership - i.e. what we haven't had since Jon Barry left. 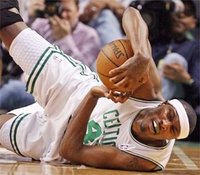 1) James Posey. There will be no shortage of suitors for the former Nugget, but Posey would look damn, damn good in powder blue and gold next season. Posey is exactly what the Nuggets need: an oversized shooting guard (he's listed at 6'8") who can defend the opposing team's best scorer while consistently hitting three-pointers of his own, thus spreading the floor for his teammates. In addition, Posey leads by example with a tireless and tough effort on both ends of the floor. A Posey/Iverson/Smith backcourt would be just too good to be true. 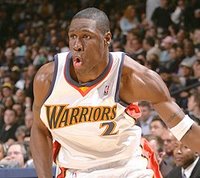 2) Mickael Pietrus. When given ample playing time, Pietrus produces. In 2006-07, the 6'6" Pietrus put up 11 ppg to go with 4.5 rpg and 39% three-point shooting...while often guarding the opposing team's best shooting guard. He sulked on the bench last season under Don Nelson, but who didn't? (See Davis, Baron). And as an added bonus, if the Nuggets acquired Pietrus, they could keep Yakhouba Diawara's translator!

3) James Jones. Jones has been the odd man out in Phoenix and Portland, but when given playing time, he can be a lethal three-point shooter (evident by his 44% shooting from behind the arc last season) and an overall offensive threat. I'm not sold on his defensive chops, but at 6'8" and 27 years old, he's someone the Nuggets should consider.

4) Michael Finley. I've tried finding something on San Antonio re-signing Finley and have come up empty. So if he's re-signing with the Spurs and this is a non-starter to even suggest it, forgive me. But I'm unclear as to why Finley is so low on everyone's free agent lists. Yeah, he's 35 and has played in a boatload of playoff games, but he still appeared in all 82 games last year and shot a respectable 37% from three-point range (including a lot of clutch three's...just ask the Nuggets). Again, at 6'7" he gives the Nuggets more balance height-wise in the backcourt, in addition to a guy who can spread the floor as a legitimate three-point threat.

5) Sam Cassell. I know what you're thinking: just what a team already full of egos needs. But why not bring the career Nugget-killer Cassell over to our side for a one season tryout? Cassell has been quoted as saying George Karl is a "great coach" and frankly, the Nuggets could use a vocal leader both on the floor and in the locker room. And even though Cassell didn't do well in Boston's structured offense, he could thrive - even at 38 - in the Nuggets free-for-all "system." (Let's be honest, it would just be great to see a knucklehead playing with house money like Cassell paired with Carmelo Anthony, Allen Iverson, Kenyon Martin and the disaster that is the Denver Nuggets locker room).

The only thing I know about Rush is that he put up double-digit scoring numbers in 19 out of 27 games (includng 42% three-point shooting) while on my Fantasy Team in January and February last season. I give Rush a lot of credit for helping my team finish second in the season-long boat race that is rotisserie basketball. But I digress. Rush hits the same notes already mentioned with the guards above: he's tall (6'6") and he can spread the floor (career 40% three-point shooter).

7) Shaun Livingston. Definitely the worst suggestion on this list considering his knee was broken into about twelve different pieces two years ago. But how many 6'7", 22-year-old point guards do you know? At the very least, Livingston merits consideration for a team with a perpetually short back court sans J.R. Smith (who's generously listed at 6'6" by the way).