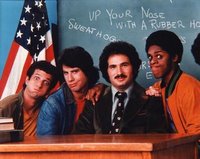 The Rocky Mountain News' Chris Tomasson is reporting that the Nuggets are likely re-signing Anthony "A.C." Carter to a one-year deal. Readers of this blog know that while I'm not a proponent of having Carter be the team's starting point guard, I have to defend the guy for giving a workmanlike effort every time he plays. For his paltry $1 million salary, he gives more effort than anyone on the team not named Iverson or Najera. And at the end of the day, its not A.C.'s fault that coach George Karl allots him so many minutes. What's he supposed to say: "Uh, no thanks, coach, I'm gonna sit this one out"?

Meanwhile, a lot of Denver Stiffs readers were advocating a sign and/or trade for the Bulls' Chris Duhon as the Nuggets possible starting point guard. I've never liked Duhon's game (6.9 ppg, 4.5 apg and a ghastly 38.7 career shooting percentage) as anything more than a backup point guard. And now that the Knicks have grossly overpaid him (rumored to be their full midlevel exemption of $6 million per season for two years), I'm convinced that Isiah Thomas is still running their organization. I mean, Donnie, come on, you're kidding, right? You're better than that!

While we're at it, does anyone have Duhon's agent's number? I'd like to hire that guy to get DenverStiffs.com some more business!