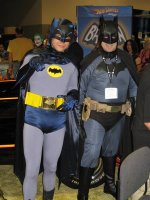 I probably shouldn't be mentioning this on a sports-themed blog, but unlike Nuggets management I pride myself on being transparent and upfront with those who support me. So here it goes...

I'm taking off tomorrow for the annual San Diego Comic-Con International and it will be my - eeeek! - eighth Comic-Con in a row (if you don't know what Comic-Con is, go to YouTube).

For those of you who have followed this blog since its inception, you know that when I'm not skewering George Karl or Mark Warkentien, I actually have a real job as a syndicated cartoonist and animation producer. I go to "the Con" each year to promote my comic strip and animated shorts project "Girls & Sports," see friends and colleagues from the industry, and sign a few autographs. Very few, by the way, as the Comic-Con crowd aren't exactly into sports...or girls.

So unless big Nuggets news breaks this week, I probably won't resume consistent blogging until Sunday. I can promise you one thing in the meantime, though: I will be the only person at Comic-Con wearing a Nuggets T-shirt.